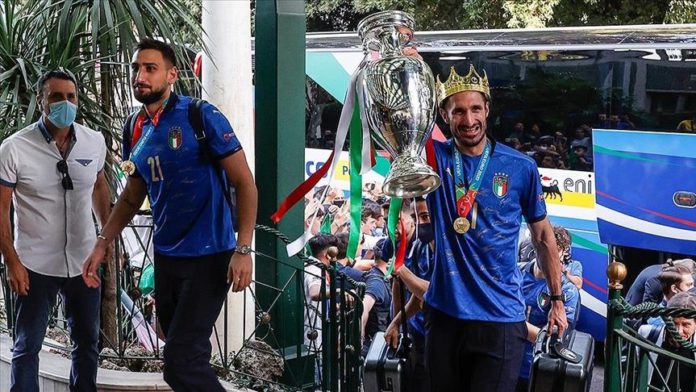 Italians celebrated the UEFA EURO 2020 success after Azzurri won it on Sunday.

Italy were crowned the EURO 2020 winners on Sunday after defeating England on penalties 3-2 in the final at London’s iconic Wembley Stadium.

During the night, Italian fans in Rome celebrated their victory in the EURO 2020, which was their first European Championship trophy since 1968.

The fans in Rome lit fireworks and flocked into the streets for vehicle convoys to celebrate the win.

In the EURO 2000 final in the Netherlands’ Rotterdam, they lost against France 2-1 after a golden goal in the extra time.

Then Italy once again reached the final stage in the European championship. However, in the 2012 final in Kyiv, Spain hammered Italy 4-0 to defend their title.

Meanwhile, the Italian national team arrived in Rome early Monday with the EURO 2020 trophy as Italian captain Giorgio Chiellini was holding the cup. He was wearing a crown and cheered the fans.

Now in a hotel to have a rest, the team is expected to be received by Italian President Sergio Mattarella and premier Mario Draghi for their EURO success.