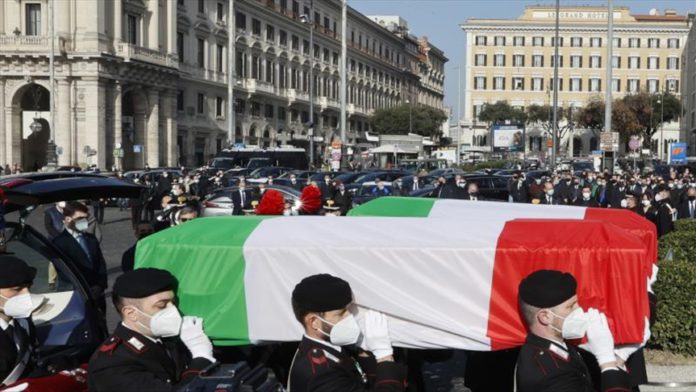 Italy on Thursday paid tribute with a state funeral to its ambassador to the Democratic Republic of Congo (DRC) and his bodyguard, who were killed in an attack on a UN convoy in the troubled African country.

Luca Attanasio, 43, and Vittorio Iacovacci, 30, were shot dead during a kidnapping attempt while travelling with a convoy to visit a school feeding project close to the regional capital Goma. World Food Programme’s local driver Mustapha Milambo was also killed in the ambush.

Cardinal Angelo De Donatis, the pope’s vicar for Rome, presided over the solemn funeral at the Basilica of Santa Maria degli Angeli, which was attended by Italy’s Premier Mario Draghi along with top civil and military authorities.

According to the first investigations on the incident, a local armed group stopped the two-car convoy as it travelled towards a WFP school feeding project.

Italy has formally asked the UN for an immediate inquiry into the attack, amid questions such as whether the security provisions were sufficient for the mission, organized in a very dangerous area of the war-torn country.

Cardinal De Donatis in his eulogy called the attack “stupid and ferocious” and said it was only sensible that Italy, Congo and the entire community of nations weep over such violence.

“Let us pray together that today is a day in which the prayer for peace in Congo and in all nations torn by various forms of war and violence is raised to heaven,” he added.

The funeral, broadcasted live on state television, was attended by Carabinieri officers as pallbearers and altar servers, with a military band performing Chopin’s funeral march, as the flag-draped coffins were carried in and out of the basilica.

An emotional crowd applauded as the two hearses pulled out of the piazza carrying the coffins for burial.

Judicial sources in Rome said that preliminary autopsy results showed that both men were hit twice by crossfire in an apparent kidnapping attempt, while there were no signs of a planned execution.

Italian Carabinieri police investigators have flown into Congo to work with police there and will then follow up with a full probe.

Local militias have been blamed for the attack by Congo’s authorities.

Congo’s President Felix Tshisekedi has said he wants to end decades of unrest in the east of the country, which is rich in precious metals and devastated by local infighting, but killings have more than doubled in the past year, according to the UN.

'Uighurs may be able to claim genocide ruling in UK'