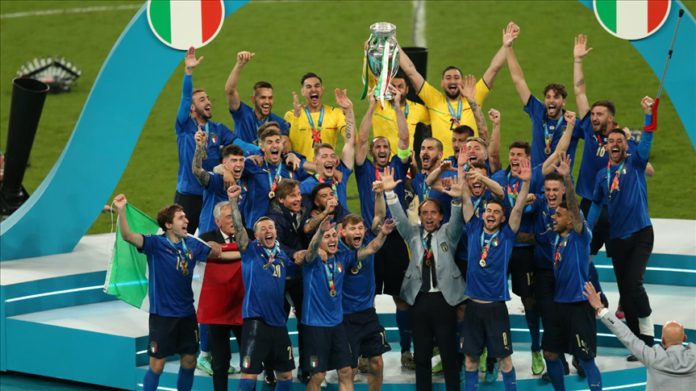 Italy were crowned the winners of the EURO 2020 on Sunday after defeating England on penalties at London’s iconic Wembley Stadium.

England made a great start to the match with an early goal by Luke Shaw from six yards out in the second minute, assisted by Kieran Trippier with a cross.

Shaw scored the quickest goal ever in a EURO final and his first goal for his nation.

Following the goal, Italy took control of the match, but they failed to break England’s defense and create scoring chances.

They had only one shot on target during the first half.

England expected a penalty after Raheem Sterling fell in the penalty area, but the referee did not agree with him at the beginning of the second half.

Italy were dominant in the second half and came close to scoring with Federico Chiesa in the 62nd minute, but his shot was blocked by Jordan Pickford.

In the 67th minute, the Azzurri finally levelled. Marco Verratti’s header was denied by Pickford, but Leonardo Bonucci hit the rebound into the net.

Bonucci, at 34, became the oldest player to score in a European Championship final.

The match went into extra time after both sides could not find more goals in regular time, with a 1-1 score.

In the 97th minute, England’s Kalvin Phillips fired a volley from the edge of the box but missed the target.

Both teams could not score during extra time and the match then went into penalties.

Italy went on to beat England 3-2 on penalties and won their first European Championship trophy since EURO 1968.

Bosnia and Herzegovina's refugee crisis getting out of hand