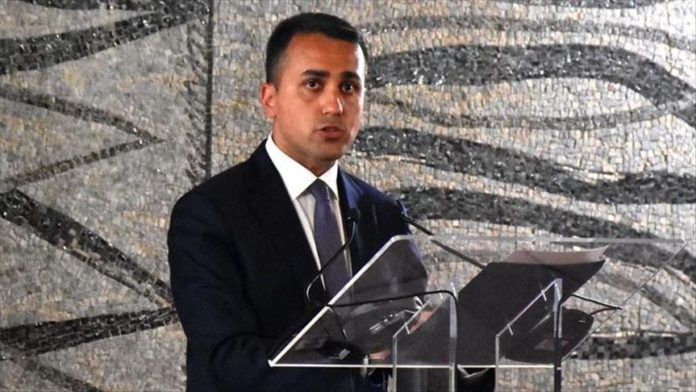 Italy’s top diplomat expressed concerns on Friday over the ongoing conflict in the territories of Upper Karabakh, saying that a negotiated solution is the only way out.

Speaking at a joint news conference in Rome after meeting his Turkish counterpart Mevlut Cavusoglu, Foreign Minister Luigi Di Maio said they discussed the restart of hostilities between Armenia and Azerbaijan in the region of Upper Karabakh.

“I have expressed our concern over the clashes, which pose the risk of a military escalation. The status quo is not sustainable, only a negotiated situation could be a solution,” Di Maio said.

During the news conference, Cavusoglu said that Turkey stands in solidarity with Azerbaijan against its struggle for the occupied territories of Upper Karabakh.

He added that for Azerbaijan to agree with a cease-fire, Armenia must withdraw its forces from occupied Azerbaijani territories.

Azerbaijan’s parliament recently declared a state of war in some of its cities and regions following Armenia’s border violations and attacks in Upper Karabakh, also known as Nagorno-Karabakh.

During their meeting, the Italian and Turkish ministers also addressed the situation in Libya, calling for a strong cooperation between Italy and Turkey in the region.

“In Libya a strong cooperation is essential. There’s a window for progress in the stabilization (of the country),” Di Maio said.

“On the military front we support direct negotiations for a durable and sustainable cease-fire, with the creation of a demilitarized zone,” he added.

The Italian top diplomat also said that Libya is working on a complete restart of oil exports to reduce the tensions in the region.

“Libya deserves a stable future and not another war,” Di Maio added.