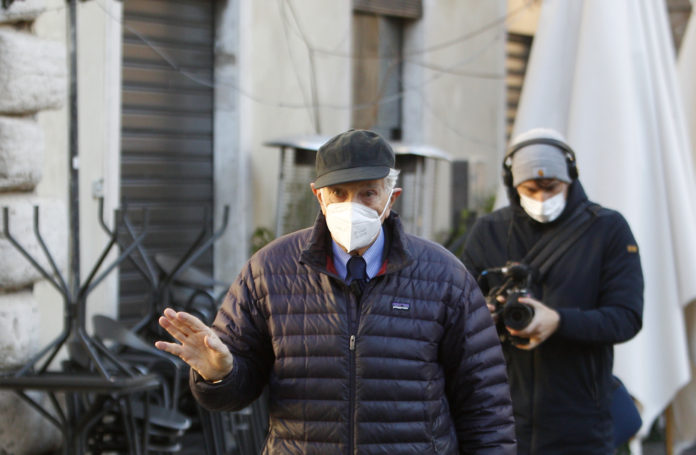 Italian journalist and writer Corrado Augias personally returned his Legion of Honor on Monday to the French embassy in Italy, in a sign of protest against the decoration of Egyptian President Abdel Fattah al-Sisi with the same award.

Augias, 85, refused to “share this honor” with al-Sisi, who was decorated with the Grand Cross during his state visit to France last week.

“In my opinion, President (Emmanuel) Macron should not have granted the Legion of Honor to a head of state who objectively became an accomplice of atrocious criminals,” Augias wrote in a letter published by Italian daily La Repubblica.

The gesture reflects the indignation of the Italian public as Egyptian secret services are suspected of being responsible for the kidnapping, torturing and killing of Italian researcher Giulio Regeni.

Regeni, a 28-year-old doctoral student studying in Egypt, went missing on Jan. 25, 2016 — the fifth anniversary of a popular uprising that forced President Hosni Mubarak to step down after 30 years in power. Nine days later his body was found on a highway.

While Egyptian authorities deny any involvement in the student’s death, observers say the signs of torture on Regeni’s body were similar to those caused by Egyptian police’s tortures.

His mother, who has fought since then for finding the truth about her son’s death, said she recognized the body only by the tip of his nose.

After years of investigations conducted by Italian prosecutors, despite a lack of cooperation from Cairo, Rome prosecutor’s office on Dec. 10 requested trial for four Egyptian officers, including a general.

“The measure of fairness has been exceeded or even outraged,” Augias wrote. “The assassination of Giulio Regeni represents for us Italians a bloody wound, an affront, and I would have expected from President Macron a gesture of understanding if not of brotherhood, in the name of the Europe we are trying together, so hard to build.”

After the discovery of Regeni’s body, Italy temporarily recalled its ambassador to Egypt. But, since then, Rome has gradually reestablished its relations with Cairo despite protests from the student’s family.

Roberto Fico, the speaker of Italy’s Chamber of Deputies, said after Augias’ gesture: “Europe must be united … especially when fundamental rights are at stake.”

Riccardo Noury, Amnesty International’s spokesperson in Italy, said he hoped that other Italian personalities decorated with the Legion of Honor would “form a long line” outside the French embassy to imitate Augias’ protest.

The UK-based human rights watchdog has been active in demanding the truth for Regeni, and the release of Patrick Zaky, an Egyptian student from the University of Bologna who has also been imprisoned in Cairo since last February.