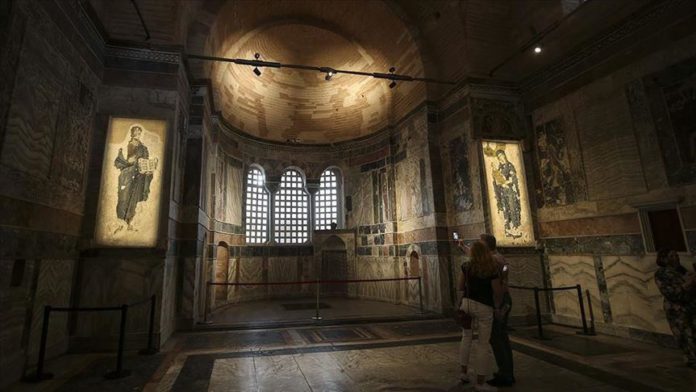 Weeks after the historic return of Hagia Sophia to a mosque, another ancient house of worship in Istanbul is set to reopen for Muslim worship.

The sixth-century Chora Museum, located in Istanbul’s Fatih district on the historical peninsula, will reopen as a mosque for Muslim prayers, authorities said Friday.

A presidential decree published in the country’s Official Gazette today annulled a 1945 Cabinet decision making Chora (Kariye in Turkish) into a museum.

Dating back to the sixth-century Byzantine Empire, the beautiful structure of the Chora Church remains intact. In the 16th century, after the conquest of Istanbul by Mehmet II, the church was converted into a mosque.

The interior of the building is covered with some of the oldest and finest surviving Byzantine mosaics and frescoes. They were uncovered and restored after the building was turned into a museum.

Due to the prohibition of iconic images in Muslim prayer venues, the church’s frescoes were covered under a layer of plaster, which took their toll on them, along with major earthquakes (specifically in the 12th century).

After the Cabinet decided to make it a museum, Thomas Whittemore and Paul A. Underwood from the Byzantine Institute of America and the Dumbarton Oaks Center for Byzantine Studies sponsored a restoration project.

As in the conversion of Hagia Sophia, authorities are expected to preserve the frescoes in Chora with special lighting and covering techniques.

COVID-19 variants 'wave' in US weeks away: Experts