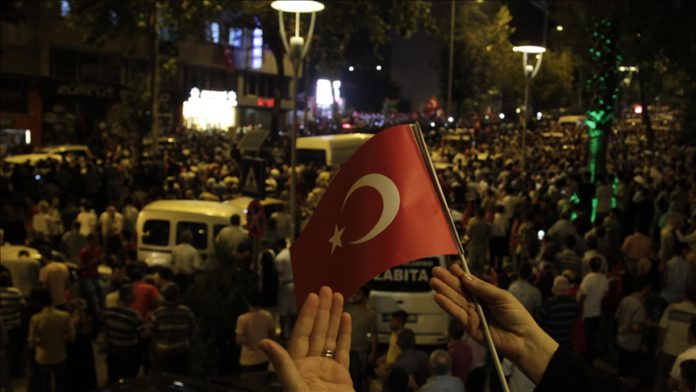 An Istanbul symposium on Tuesday discussed the 2016 defeated coup in Turkey plotted by the Fetullah Terrorist Organization (FETO) and other coups across the world.

“The coup attempt, which was defeated on July 15, was aimed at changing the direction and destiny of the country,” said Mehmet Ozturk, Anadolu Agency’s world languages editor-in-chief, during a symposium in Istanbul marking five years since the defeated coup on July 15, 2016.

“We protested as a nation, and they were defeated. Like everyone else, Anadolu Agency did its part on the night of the coup,” Ozturk added at the second session of the symposium titled “Coups as a Foreign Policy Tool” where he made a presentation on coups in Pakistan.

FETO and its US-based leader Fetullah Gulen orchestrated the 2016 defeated coup, in which 251 people were killed and 2,734 injured.

Recalling the night of the coup attempt, Ozturk said: “We did our duty to the best of our ability at a time when the surroundings were bombed and the headquarters of the agency itself was under the threat of being bombed.”

Anadolu Agency did not allow the relationship between the government and the public to be cut, Ozturk said, adding: “We also conveyed the [news of the] resistance to the coup to the whole world through news, photos and video footages broadcast in 10 languages, primarily English, Arabic, French, and Russian.”

“Without heeding the so-called instructions sent by the putschists via faxes, we delivered the highest level of civilian reactions to Turkey and the world,” he said. “Among these were critical news reports that the coup did not take place within the army hierarchy.”

Ozturk also recalled the resistance at the agency during the attempted coup night with barricades set against a possible attack of the putschists on Anadolu Agency headquarters.

He also elaborated on the books that the agency published following the defeated coup to document the events in various languages.

“One of the most important examples of these is Minute by Minute, FETO’s Coup Attempt,” he said, referring to the book which documents the chronology of failed coup attempt and following days.

Stating that Turkey has suffered a lot from previous coups including in 1971, 1980 and 1997’s “postmodern coup,” Ozturk said that he was speaking as someone who “experienced and was a victim” of the last one.

During the session which was moderated by Talip Kucukcan, chairman of the Symposium Scientific Committee, Ozge Yilmaz from Turkey’s Karabuk University talked about the impact of the US on the coups in the Middle East counties, while Hamid Ibrahimi of the Center for Iranian Studies (IRAM) addressed the 1953 coup in Iran and the role of foreign powers.

Sami Al-Arian of Istanbul Sabahattin Zaim University talked about coups and the influence of foreign powers in the Arab world and Egypt.