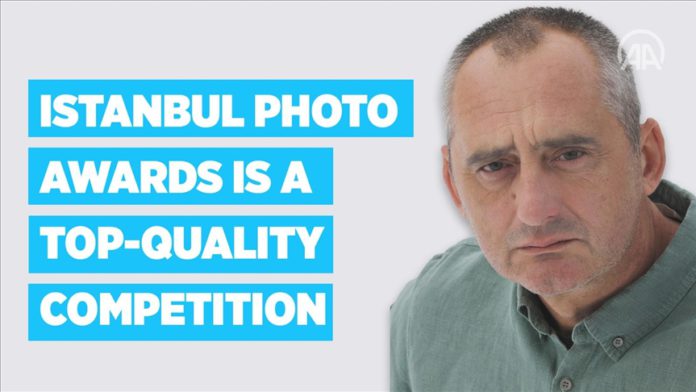 A member of the jury for Istanbul Photo Awards 2021 said he was “honored” to be a part of the “top-quality competition.”

“It is amazing. And it’s a top-quality competition and absolutely loved, and I’m honored to be a member of the jury this year,” said Goran Tomasevic, a seasoned photojournalist for Reuters.

“I would encourage everyone to apply. I should apply also next year, when I’m not the judge. I love to compete. I love it.

“Everyone should apply; especially [those] with such precision or lucky single photos. And I would encourage everyone to attend every spot [category of the competition] because there are many of my colleagues, and I tell them to get this [participate in it] next year,” he said.

In his first year as a jury member of the competition, Tomasevic gave his impressions on the jury.

“The jury — some of the people I knew, some people I never met. But we simply clicked. It was very quick. And we even noticed that we didn’t agree about certain things, and everyone was easy[going] and supportive and positive. And it was easy to come to the conclusion of what we [the jury] believed was the best. So there were really great things too. All the jury members were really impressive. And I really enjoyed it and it was easy for me as a professional to contribute with my judgment because everyone did a fantastic job.”

Praising the quality of the photographs submitted in the seventh round of the competition, he said: “I saw some amazing works. Surely, we could not give awards to everyone. That’s why it’s a competition.”

“But I just want to say that if somebody didn’t get an award, they shouldn’t be disappointed, because there were lots of really, really good works. It was really hard for us to decide.”

Due to the COVID-19 pandemic which has been running rampant worldwide for over a year, the jury evaluated and selected the winning photographs through an online platform developed by an Anadolu Agency team exclusively for the contest.

“We were living in a time of coronavirus. So it was frustrating not ‘seeing’ the brains, not meeting [them], while sitting next to each other and discussing pictures. From the first moment taking pictures apart in the competition, it was perfect. Everything was simple and clear. And I’m not a technical person, but I didn’t have troubles. It was easy to follow the pictures, easy to judge,”​​​​​​​ Tomasevic said.

He congratulated Bangladesh-based photographer Mohammed Shajahan for his shot titled Mom Love for being awarded Photo of the Year.

“It’s always been difficult for me to describe and explain for some pictures why they’re the best or the why we love them,” he said.

“It’s difficult because simply, they just stand out, and they just shine when you look at and judge a competition, or even it can be my pictures or pictures of others,” he said, adding “my colleague did a very good job.”

He said one of the reasons he loved Mom Love was that despite its vague background and black-and-whiteness, “it was very clear that this is the time we are living in, with the virus and everything, and the picture is emotional. For me, it could not be more clear.”

Regarding Shajahan’s picture, he said “it was simply that the picture just shines, you know, and it’s perfect. It’s in focus. It’s nicely composed.”

“That’s hitting you in the face. This is it.”

Tomasevic said there is no certain criteria for him in choosing among the submitted pictures. He said photographs that are technically flawed can still be good.

“Sometimes in the past, I would like some pictures. They were not technically perfect, but they were still good. So it’s perfect,” he added. “As for good pictures, you shouldn’t need to describe them. You either see them immediately or not.”

Tomasevic also touched on the beginning of his career.

“War hit my country when I was really young. So there was no other choice than to go into this direction in a business. Sadly, this happened. I wish it never happened here.”

He went on to compare the past and present of photojournalism, telling how the sector became more demanding with the developments in technology.

“When I started for Reuters and the first pictures I [took when I] moved on as a freelancer in the ‘90s, I was still printing pictures in my hotel rooms and typing scripts with a typewriter, and we would send one, two or three pictures per story maximum. And then when we started getting all those scanners and laptops, we would have to file more.”

Congratulating the winners of all categories, Tomasevic draw attention to the challenges of shooting a single and series of photographs.

“How I have been trained by the best professionals is that you can say more with one single photograph — the whole story. I believe a single shot is the most challenging,” he said.

“To describe it, you remember I was telling you about when we should file two pictures in the ‘90s, for example one horizontal for the front page and one wide for the article inside. So with these two pictures, we were challenged to describe the biggest events in the world at that time,” he said.

Highlighting the importance of the message in a photograph, Tomasevic said: “A group of photographs, [even if they are] good, it doesn’t mean that they are telling the story. So this is the challenge: how to present your story.”

“So I believe both things are challenging. For me personally as a photographer, the challenge was single, but stories are also not easy and how you package it that is very important,” he said.

“That is how I see, and that is how I was trained. And then with the start of this new kind of technology, we have now to start the day with a slideshow with so many pictures, and it’s a totally different dynamic.”

Tomasevic said he is content with the development of quality cameras in smart phones and their widespread use.

“I truly believe in today’s world of the phones and tablets. People are more looking at and going through the pictures than in the newspapers in old times. So because of that, I’m saying that photography has been more important than ever before.

“I think it is more important than it has ever been. The more we look at it, there are more effects on the people than in the past.”

Critical about employers who demand that their photographers shoot videos, Tomasevic said: “I think that pushing people to do videos and photos at the same time is absolutely killing photography.”

“This is not good for us, and either once or twice [by chance], these are good pictures; and I hate it. But I also understand that this is the time we are living in,” he said.

“Certainly, this is in news photography. There are moments [where] if you miss them, they will never come back,” Tomasevic said. “If you want to have a picture to be remembered, then [you need] to be focused in work, and you have to work hard.”

Tomasevic reminded Anadolu Agency’s audience that photojournalism comes with certain responsibilities and challenges and talked about the most challenging moments he has faced as a photographer.

“I have a few [challenging moments], but one of them definitely happened in Iraq in 2003, when the US Army or Marines accidentally killed and injured some of our colleagues,” he said.

“Sadly, these kinds of things are happening sometimes. And this was maybe the most striking or the hardest moment in my career — and I lost a good friend, and colleagues,” he went on.

“This is often the thing I’m thinking about; where is this thin line of doing some good photography or fighting for basic survival sometimes? So with every assignment I go [for], after the assignment, it is always some sadness and happiness in some moments when we are telling friends we are back.”

Mentioning another of his challenges, Tomasevic said: “I was in Kosovo, ‘99, it [a conflict] was happening in my country, and I was presenting their story from my perspective. Because everyone was judging you because you were from that area. So I can stand proudly and say yes, I did very well in my pictures then.”

“So this is the challenge. However, it’s hard to go traveling to other places for conflicts,” he said. “But it is the hardest when the stories are in your home. It hurts the most.”

He said the variety of pictures submitted was “super” despite the COVID-19 pandemic and congratulated his colleagues across the world for the “amazing” works of an impressive variety in this period.

“I understand why we had so many of these [COVID-19 pictures] because it’s not a story which lasts two to three weeks. It was all year, and it’s more. But there was some amazing other work. I mean it’s super,” he said.

For photographers who would like to improve themselves, Tomasevic advised: “Work harder than anyone else did. This is what I did.”

“I believe I am waking up earlier and staying in the field longer than anyone else still. It’s just working hard,” he continued. “To be talented is not enough. I believe in hard work.”

As a photographer who is still passionate after 30 years of experience, he said: “I want to turn around, I want to shoot more. I’m still happy to do it. Working for new challenges. And I can’t wait to go back for some good story.”

Information related to the 2021 jury and award-winning photographs can be accessed via the website: istanbulphotoawards.com.

US consumer prices rise 0.4% in February