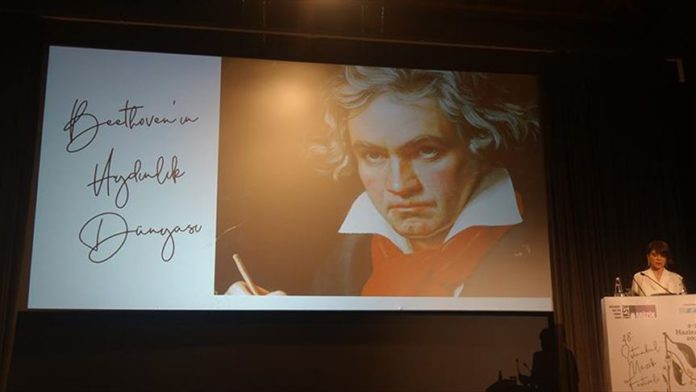 This year’s Istanbul Music Festival, which will mark the 250th birthday of classical music maestro Ludwig van Beethoven, will be held online, the organizers announced on Wednesday.

“The 48th Istanbul Music Festival will meet with music lovers virtually between 18 September and 5 October 2020,” said the Istanbul Foundation for Culture and Arts (IKSV) in a statement.

“Curated around this year’s theme, The Enlightened World of Beethoven, the festival concerts are currently being filmed at historical venues in Istanbul and various cities of Europe for audiences to enjoy on their screens,” the statement added.

The festival, previously postponed from June to September due to the novel coronavirus, will be held online “with the exception of a physical concert to take place at Harbiye Cemil Topuzlu Open Air Theatre in Istanbul” on Aug. 19 with the support of Istanbul Metropolitan Municipality, the statement added.

Turkey’s leading ensemble Borusan Istanbul Philharmonic Orchestra will take the stage at the concert, which will be held with a limited audience due to pandemic measures.

“Online concerts of the festival will be available for audiences both in Turkey and around the world with stunning image and sound quality, and accessible ticket prices,” the statement also said.

The festival concerts are currently being filmed by professional crews at historical venues both in Istanbul and in various cities of Europe, with ensembles such as the Wiener Akademie, Bilkent Symphony Orchestra, Kheops Ensemble, Philharmonix, Beethoven Trio Berlin, Borusan Quartet, Semplice Quartet as well as soloists, including Thomas Hampson, Bulent Evcil, Derya Turkan, Yurdal Tokcan, Gokhan Aybulus, and Ezgi Karakaya.

According to the statement, the concert venues include the Theodosius Cistern, Palace of the Porphyrogenitus, Khedive Palace, Tophane-i Amire Culture and Art Centre, Harbiye Saint Esprit Cathedral, Surp Ohan Vosgeperan Armenian Catholic Church, and Sureyya Opera House in Istanbul along with places such as the Perchtoldsdorf Castle and Abbaye de Stavelot in various cities of Belgium, Germany, Austria, and the Netherlands.