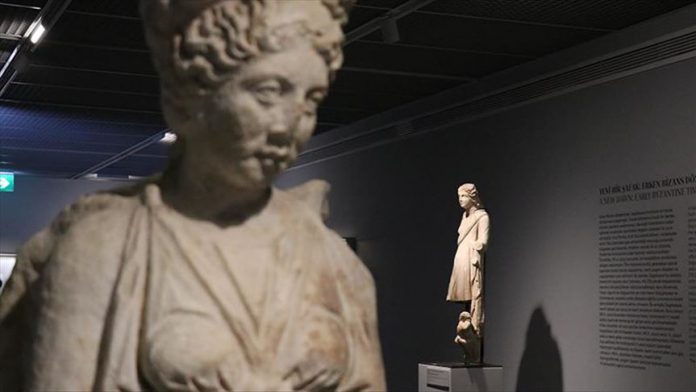 A total of 368 artifacts from the ancient city of Sagalassos in southwestern Turkey will be displayed at an Istanbul gallery, organizers said on Tuesday.

Yapi Kredi Cultural Centre will be hosting the exhibition titled Meanwhile in the Mountains: Sagalassos from Nov. 27 to May 28, 2020.

Peter Talloen, deputy director of the excavation works on the site, told Anadolu Agency that the use of original material during the restoration work was what makes Sagalassos unique.

The Sagalassos ancient city in Aglasun district of Burdur province is 1,750 meters above sea level and dates back to 5,000 years.

Because the city was located at a height, a lot of the ancient structure is exactly how it was in the 13th century when it was abandoned, said the professor of Turkey’s Suleyman Demirel University.

Talloen, who began working at the site as a student in 1995, said: “People visiting the site get the real impression of what the ancient urban life, living in a city meant in antiquity.”

He said the site is very close to its original state.

“This place was really abandoned, the population moved down to the valley and they didn’t take any ancient stone or any object from the ancient city, everything was left as it was.”

As part of the exhibition, visitors will see a variety of objects including mammoth bones from the Burdur region and the massive statues of Roman emperors Marcus Aurelius and Hadrian.

The archeological site, which was included in the Tentative List of UNESCO’s World Heritage Sites, offers the best samples of Roman-era architecture.