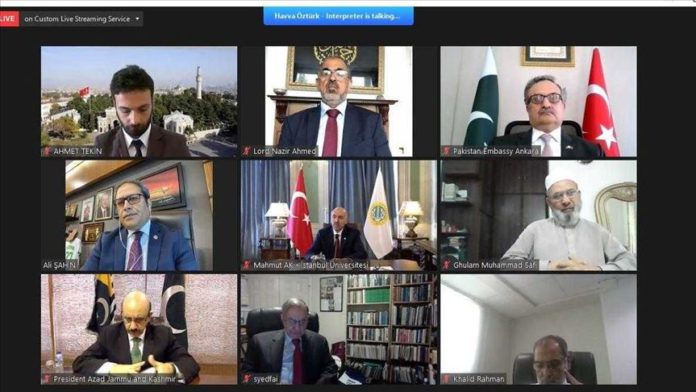 A conference in Turkey called on Tuesday for the secretary-general of the UN to appoint a special envoy to resolve the dispute surrounding Kashmir and for it to start mediation efforts on holding a UN-sanctioned plebiscite in the region.

In a 13-point joint declaration issued at the end of a virtual two-day international conference on Kashmir hosted by Istanbul University, the participants demanded an “early, just and durable resolution” in accordance with UN Security Council resolutions.

Welcoming recent remarks by Turkey’s President Recep Tayyip Erdogan that Ankara is “in favor of resolving the Kashmir issue by taking into consideration the expectations of our Kashmiri brothers, through dialogue based on UN resolutions,” participants in the conference condemned alleged demographic changes by India in the disputed region after a new residency law.

The participants in the conference called on the Organization of Islamic Cooperation (OIC) to renew its offer to India of sending its fact-finding and good offices missions to Jammu and Kashmir.

The conference participants decried what they called “serious crimes against humanity committed by the Indian military and paramilitary forces in Jammu & Kashmir” and sought the release of political prisoners by India.

“These crimes include genocide, massacres, extrajudicial killings, reprisal killings, arbitrary detention, torture, use of rape as a weapon of war, burning of houses,” they added.

Speaking at the conference, Pakistani Consul General in Istanbul Bilal Khan Pasha said that for economic prosperity and development in South Asia, the “resolution of Kashmir is a must.”

Urging India to halt its “blatant human rights violations in Kashmir,” Pasha demanded that New Delhi “provide unhindered access to the OIC, IPHRC, UN, human rights organizations and international media to report on the ground situation in the occupied territory.”

In another presentation, Kashmiri businessman Mubeen Shah proposed to three-point formula to Pakistan on Kashmir, including declaring Pakistani-administered Jammu and Kashmir as a “free economic zone,” “government in exile” or “government independent in all respects in Muzaffarabad to fight the freedom war and to get it recognized like Palestine.”