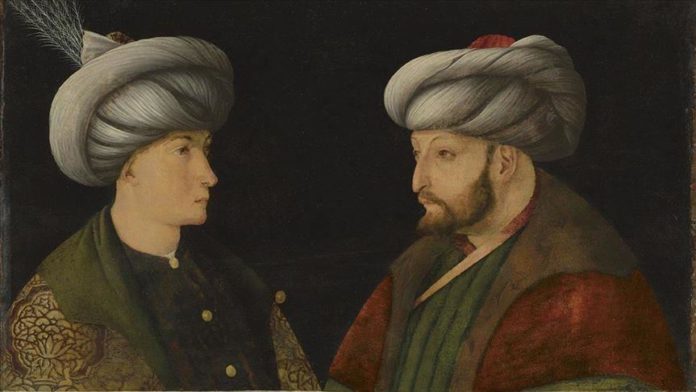 The municipality of Turkey’s most populous city purchased a portrait of Ottoman Sultan Mehmet II “the Conqueror” at a London auction, the mayor of Istanbul announced Thursday.

“Great news! A 15th century portrait of Sultan Mehmed II the Conqueror was bought by the Istanbul Metropolitan Municipality at a live auction in London today,” Ekrem Imamoglu said on Twitter after the auction, sharing a photograph of the canvas.

“We are thrilled and cannot wait to welcome this celebrated work of art in Istanbul soon.”

According to the London-based world-famous Christie’s auction house, the municipality’s winning bid amounted to £770,000 ($955,000) for the oil painting, which is believed to be the work of Italian painter Gentile Bellini in 1480.

Sara Plumbly, an official at Christie’s, said in an earlier interview with Anadolu Agency that the work was unsigned.

Plumbly said one of the great mysteries of the portrait was the second figure depicted next to Fatih Sultan Mehmet.

“We don’t know who this other figure is. There have been a few suggestions — for instance, one of his three sons. But that does not seem to fit precisely how he is depicted in terms of the age that one of the sons would have been at the time,

“Some others suggest he might be a European dignitary. He is sort of clean-shaven. He does not have the beard you might expect from an Ottoman man.”

She pointed out that a second figure drawn on the same scale in portraits of Ottoman sultans was not common practice.

“If you have another figure, he should be either a very important person or someone from the royal family.”

Mehmed II is the Ottoman sultan who conquered Istanbul and earned the title of Fatih (the Conqueror) at the age of 21 and leveled up a Turkish state into an empire that would rule regions in multiple continents for centuries to come.