TurkishPress
Home News Israel’s 'annexation' plan only supported by US 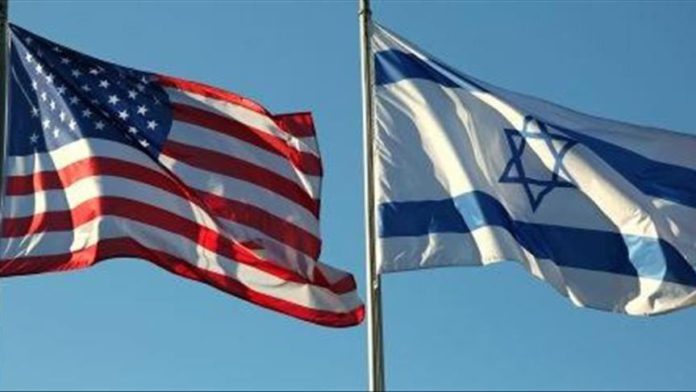 No other country, apart from the US, supports Israel’s annexation plan for occupied Palestinian territories in the West Bank.

Israeli Prime Minister Benjamin Netanyahu plans to “annex” the illegal Jewish settlements in the West Bank and the Jordan Valley, based on the so-called Middle East peace plan announced by US President Donald Trump in January.

Territories Netanyahu plans to annex constitute about 30% of the West Bank.

Netanyahu’s annexation plan, aimed to be launched on July 1, collapsed due to objection of the coalition partner and Defense Minister Benny Gantz to the way of implementation, as well as due to the lack of US administration’s approval.

While Israeli prime minister said Israeli and US officials continue to discuss the start of “annexation”, people close to Netanyahu told local media the plan could be implemented later this month.

The US administration will determine when the “annexation” plan, which reinforces the occupation in the West Bank, will come into force.

The coalition agreement signed by Netanyahu and Gantz includes a requirement to implement the “annexation” plan after the approval of the Trump administration.

It is not yet possible to predict when Trump will have a green light on Israel’s “annexation” plan, as the US has been hit by the pandemic as well as protests over the killing of George Floyd due to police violence.

Netanyahu seems determined to implement the plan after obtaining US approval.

Except for Jordan, Arab countries gave a weak reaction to the “annexation” plan.

“We will not accept unilateral Israeli moves to annex Palestinian lands and we would be forced to review all aspects of our relations with Israel,” Jordanian Prime Minister Omar al-Razzaz said.

Jordan’s Foreign Minister Ayman al-Safadi said Friday that his country does not have land in the occupied West Bank where Israel plans to annex.

“Jordan is able to protect its borders and interests,” he said, while commenting on Israel’s annexation plan and noting Jordan’s borders are internationally recognized and not under any threat.

Safadi also warned of the danger of Israel’s annexation plan, and said it would certainly not remain unanswered.

Some Arab countries, including Saudi Arabia, Egypt, and the United Arab Emirates (UAE), instead of taking concrete steps against the “annexation” plan, just responded with some reaction statements.

On April 30, the Arab League described Israel’s annexation plan as “war crime,” after a virtual meeting.

“If the occupying power [Israel] crosses the red line, we [Muslim countries] must show that this will have consequences,” Cavusoglu notes, speaking at the Organization of Islamic Cooperation’s Executive Committee Extraordinary Ministerial Meeting on Israeli threats to annex parts of Palestine.

Although the Trump administration supports the plan, the leading names of the Democratic Party oppose the “annexation”.

Former US President Jimmy Carter also said: “Israel’s planned annexation of up to 30% of the West Bank as early as today would violate international laws prohibiting the acquisition of territory by force and changing the status of occupied territories.”

“If implemented, annexation would constitute a most serious violation of international law, grievously harm the prospect of a two-state solution and undercut the possibilities of a renewal of negotiations,” said Guterres during a meeting on the Middle East focusing on the Israeli-Palestinian conflict.

“We are at a watershed moment,” he added.

He called for an immediate re-engagement with the Middle East Quartet — the US, Russia, the EU, and the UN.

Although there are anti-annexation statements from the EU, it is stated that some member states of the bloc are opposed to taking drastic steps towards Israel.

German Foreign Minister Heiko Maas made his first international visit to Israel after the COVID-19 outbreak and warned the Netanyahu government about the “annexation” plan.

British Prime Minister Boris Johnson said: “The UK will not recognize any changes to the 1967 lines, except those agreed by both parties.”

Russia and China are also against the annexation plan.

Russian Foreign Ministry said: “The plan raises concerns that it may destabilize the situation in the Middle East region.”

China’s Ambassador to Palestine Guo Wei said he supported the establishment of an independent Palestinian state based on 1967 borders, and with East Jerusalem its capital.

* Writing by Handan Kazanci in Istanbul.