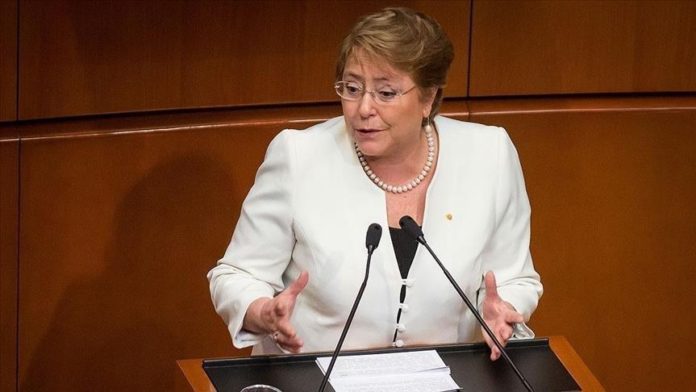 The UN Human Rights chief on Saturday expressed shock at Israeli authorities’ use of force at the funeral of Palestinian journalist Shireen Abu Akleh, urging for a prompt and transparent probe into the use of Israeli force when she was killed.

“I am following with deep distress events in the occupied West Bank, including in East Jerusalem,” Michelle Bachelet said in a statement.

“Footage of Israeli police attacking mourners at the funeral procession of journalist Shireen Abu Akleh in East Jerusalem on Friday 13 May was shocking. Reports indicate that at least 33 people were injured.”

Bachelet also said the Israeli use of force, filmed and broadcast live, appeared “unnecessary and must be promptly and transparently investigated.”

The UN rights chief said there must be accountability “for the terrible killing not just of Shireen Abu Akleh but for all the killings and serious injuries in the occupied Palestinian territory.”

Bachelet said international law requires prompt, thorough, transparent, independent, and impartial investigation of all use of force resulting in death or injury.

She said Israeli security forces had killed 48 Palestinians so far this year.

“There must be appropriate investigations into the actions of Israeli security forces,” said Bachelet. “This culture of impunity must end now.”

French Foreign Minister Jean-Yves Le Drian also said on Twitter that he is “deeply shocked and appalled at the unacceptable violence that prevented the funeral procession of Mrs. Shireen Abu Akleh from taking place in peace and dignity.”

“I recall our condemnation of her death and our demand for a transparent investigation,” he added.

Abu Akleh, who was shot dead in the West Bank on Wednesday, was buried on Friday in a Christian Orthodox cemetery next to Jerusalem’s old city.

Images circulating on the internet and broadcast by TV channels show Israeli security forces beating people carrying coffins, among other things, at the funeral.

* Busra Nur Cakmak in Ankara contributed to this story.