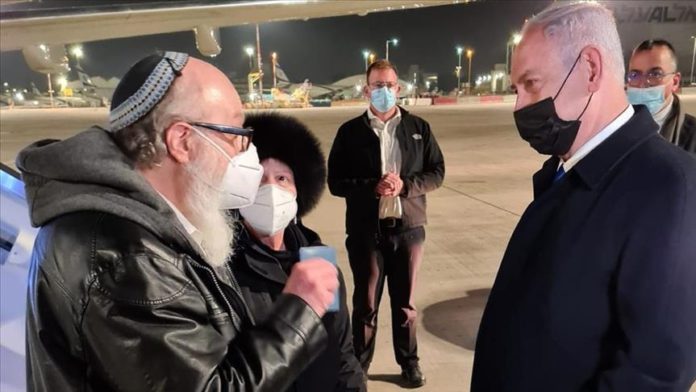 Israeli spy Jonathan Pollard arrived in Tel Aviv on Wednesday after 35 years in prison in the US for espionage for Israel, according to The Jerusalem Post newspaper.

“Now you can begin your lives anew in freedom and happiness… Now you are home.” Netanyahu wrote on Twitter.

Pollard was arrested in 1985 and sentenced to life in 1987 after being found guilty of selling military secrets to Israel while working at the Pentagon in the 1980s, where he worked as a civilian intelligence analyst for the US Navy.

In 2015, he was freed but put in house arrest and was not allowed to leave his home in New York.

According to US regulations, the restrictions shall be removed after 5 years which ended for Pollard in November.

Previously, US presidents refused repeated requests by Israel to release Pollard, however, outgoing President Donald Trump released him to be added to the many gifts offered by him to Netanyahu, including the recognition of Israel’s sovereignty over the Israeli-occupied Syrian Golan Heights and recognition of Jerusalem as Israel’s capital.

Coronavirus cases in Kuwait up to 72

Trump: US coronavirus deaths likely to peak in 2 weeks