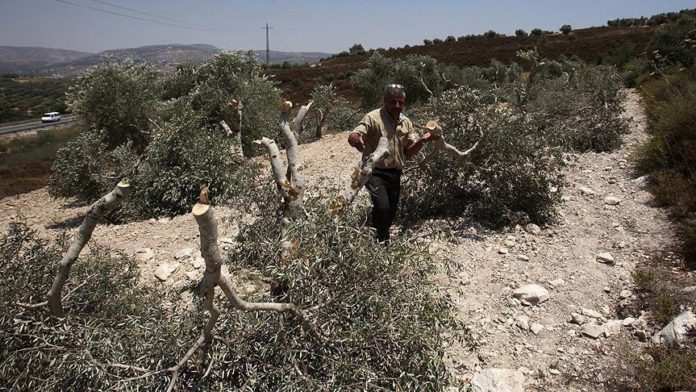 Speaking to Anadolu Agency, Wadih Alqam, the mayor of the town of Turmus Aya near the city of Ramallah, said the settlers cut down about 75 olive trees in the al-Sahl area near the Adi and Shilo settlements.

Alqam said the settlers also burned a room made of tin, wood and solar-powered lighting units of a local factory.

In the northern West Bank, settlers also set fire to agricultural lands in the town of Burin in southern Nablus province.

Ghassan Daghlas, a Palestinian official who monitors settlement activities in the northern West Bank, told the official Palestinian News Agency WAFA that settlers set fire to acres of agricultural land in the area, which is adjacent to the settlement Yitzhar.

“The occupation forces prevented the residents and civil defense crews from reaching the place, which led to the burning of dozens of trees,” Daghlas said.

Illegal settlers in the West Bank deliberately destroy agricultural crops and burn trees in Palestinian lands adjacent to settlements, in addition to preventing their owners from accessing to harvest their crops.

Palestinians say that Israeli authorities are lenient with the aggressor settlers, as part of official efforts to intensify settlements in the occupied territories.

Israeli and Palestinian estimates indicate that there are about 650,000 settlers in the West Bank, including occupied Jerusalem, residing in 164 settlements and 116 outposts.