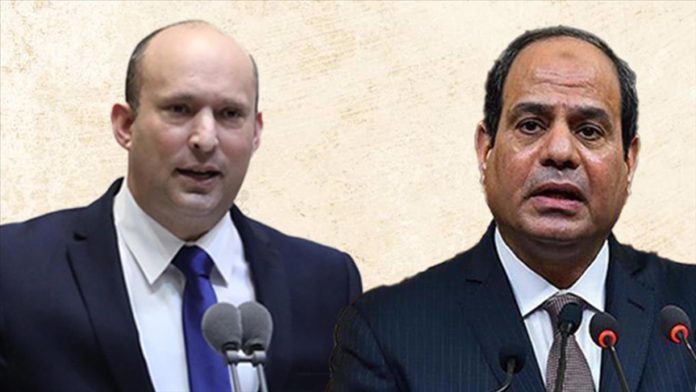 Israeli Prime Minister Naftali Bennett said on Monday he agreed with Egyptian President Abdel-Fattah al-Sisi to meet soon, according to a statement released by his office.

Bennett received a phone call from Sisi on Monday, their first such contact since Bennett took office earlier this month.

His office said that Bennett thanked Egypt for its role in brokering the cease-fire that ended last month’s fighting with Palestinian group Hamas in the Gaza Strip and its mediation to help find Israelis missing or captured in Gaza.

According to the statement, the two leaders would work towards meeting soon.

A statement by the Egyptian Presidency said Sisi underlined the importance of preventing escalation between the Palestinians and Israel, and affirmed Egypt’s support to reaching a just and lasting solution between the two sides.

An Egyptian-brokered truce on May 21 ended 11 days of fighting between Israel and Palestinian resistance factions in Gaza that erupted against the backdrop of an Israeli court ruling to evict Palestinian families from their homes in the Sheikh Jarrah neighborhood in occupied East Jerusalem.

At least 260 Palestinians were killed and thousands injured in Israeli attacks in Gaza, while thirteen Israelis were killed by Palestinian rocket fire from the seaside territory.