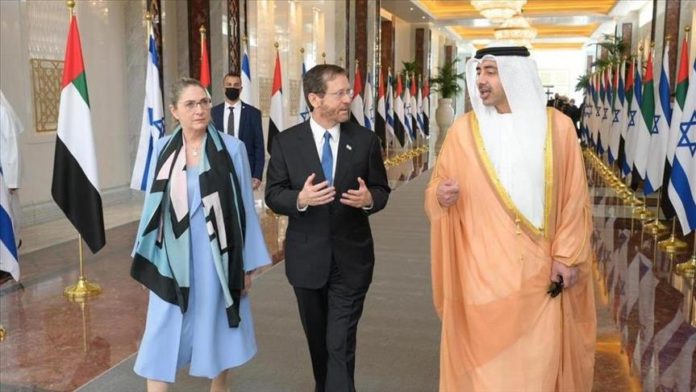 Israeli President Isaac Herzog arrived in the United Arab Emirates (UAE) on Sunday for his first visit to the Gulf nation.

“This morning, I am embarking on a historic trip to the United Arab Emirates,” Herzog said in a statement issued by his office before leaving to the UAE.

Herzog tweeted that he had a “warm reception” upon his arrival in Abu Dhabi for his two-day visit.

The Israeli president is expected to meet with top Emirati officials for talks on strengthening economic relations between the two countries. He will also visit Israel’s pavilion at Expo 2020 in Dubai.

Last month, Israeli Prime Minister Naftali Bennett visited the UAE, the first such visit by an Israeli premier to the Gulf nation.

In September 2020, the UAE and Israel signed a US-sponsored deal to normalize their relations. Since then, the two countries exchanged official visits by senior officials and have signed dozens of bilateral agreements in various fields, including investment, banking services, and tourism.

Three other Arab states – Bahrain, Morocco, and Sudan – joined the UAE in the controversial move that came to be known as the Abraham Accords.