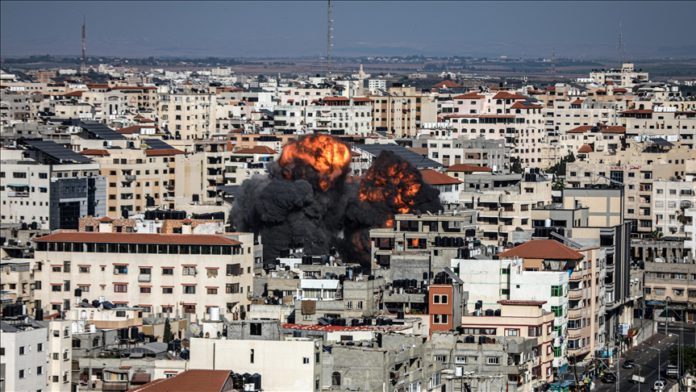 The Israeli government and army commanders are “war criminals,” a former Israeli Air Force pilot, who was discharged from the army in 2003, told Anadolu Agency in an exclusive interview.

In Israel and the army, there are some people who are against the occupation and repression policies of the Tel Aviv administration against the Palestinians, and Yonatan Shapira is one of them.

Shapira also launched a campaign that encouraged other military members to resign considering the situation they were in.

As a result of the campaign he conducted with his friends, 27 more army pilots have resigned from their posts at the Israeli Air Force since 2003.

Following his dismissal, Shapira was fired from all the jobs he took as he participated in demonstrations to support the rights of Palestinians and drew attention to the “war crimes” committed by the Israeli army by holding international conferences. So he had to move to Norway and continues his life there.

During his interview with Anadolu Agency, Shapira explained why he joined the Israeli army and how he realized that he was “part of a terrorist organization” in his own words.

“I realized during the second Intifada what Israeli Air Force and Israeli military doing is war crime, terrorizing population of millions of Palestinians and when I realized that, I decided to not just leave but to organize other pilots that will publicly refuse to take part in this crime,” he stated.

“They were sent to throw missiles and bombs in centers of Palestinian towns. At some point, I realized that this is an act of terrorism,” he said, referring to pilots in other squadrons who were engaging in mass killing of civilians.

Reiterating “war crimes” by Israeli policies against Palestinians, Shapira mentioned that this is the message that he, along with his friends who resigned from the military, want to tell the Israeli people, the government, the prime minister, and the rest of the world.

“… this occupation is an ongoing criminal act and a war crime, and we are not willing to continue to take part in this war crime,” he added.

Emphasizing that his aim was to protect people while joining the army, the former Israeli soldier said that if he wanted to protect people, he should be on the other side, next to the Palestinians, instead of being a part of the Israeli army.

“It was a psychological and very difficult process but once you realized that you are part of a terrorist organization, you understand that you have to say no, you have to take consequences,” Shapira stressed.

“I was fired from all companies I work for in Israel and it was hard for me too, because I support Palestinian struggle and because I give lecturers all around the world, because I am part of the Boycott, Divestment and Sanctions (BDS) Movement, because I say that Israel is an apartheid state, because I say that my government and my commanders are war criminals,” he underlined.

A total of 192 Palestinians, including 58 children and 34 women, have been killed and 1,235 more injured since Israel started airstrikes on Gaza on May 10.

On Saturday night, another crime was committed by the Israeli warplanes when they struck a home in the al-Shati refugees camp, northwest Gaza. The air raid left two mothers and eight children dead while they were sleeping at home.

The recent tensions that started in East Jerusalem in the Muslim holy month of Ramadan spread to Gaza after Palestinian resistance groups there vowed to retaliate against Israeli assaults on the Al-Aqsa Mosque and Sheikh Jarrah if they were not halted.

Saudi rejects report submitted to US congress on Khashoggi murder