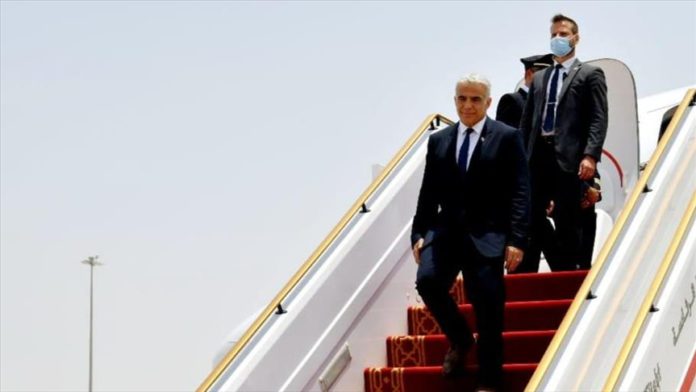 Israeli Foreign Minister Yair Lapid announced Monday that he will visit Morocco at the end of July.

In a Twitter post, Lapid said the visit comes following a phone call with his Moroccan counterpart Nasser Bourita in the weekend, noting that the visit aims to renew “full diplomatic relations.”

Lapid said the visit will take place after the opening of direct flights to Morocco at the end of July.

Describing the event as “historic”, Lapid thanked the King of Morocco, Mohammed VI, for his role in renewing relations between the two countries.

Lapid also said Bourita would make a trip to Israel later to inaugurate a diplomatic mission.
He said the visit will mark the beginning of tourism and trade agreements “and for comprehensive economic and political cooperation between the two countries.”

Moroccan authorities have yet to comment on Lapid’s statements.

Morocco became the fourth Arab country to normalize relations with Israel in 2020 after the UAE, Bahrain, and Sudan.

The normalization deals have since drawn widespread condemnations from Palestinians, who say the accords ignore their rights and do not serve the Palestinian cause.

On Dec. 10, Israel and Morocco announced the resumption of diplomatic relations between them after they were suspended in 2002 following the second intifada uprising.

China reaffirms support for Palestinian cause