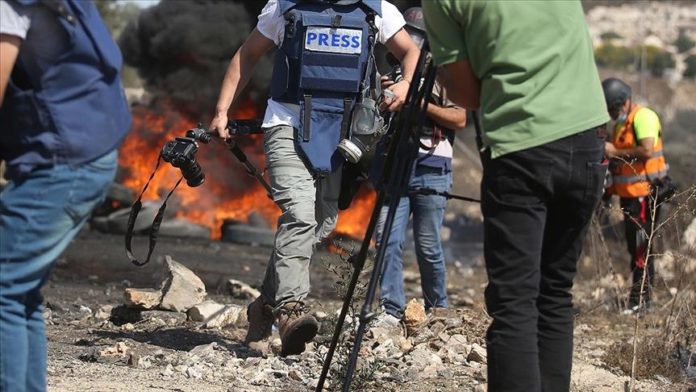 Anadolu Agency’s photojournalist Sariye Ceradat was injured by Israeli forces on Tuesday during a protest in the occupied West Bank.

Soldiers fired plastic bullets and teargas canisters in an attempt to disperse the protesters. During the intervention, Ceradat was injured by a plastic bullet in his left shoulder, before receiving treatment by medics on the spot.

According to Palestinian sources, Israeli authorities destroyed more than 500 Palestinian homes and businesses in occupied East Jerusalem and the West Bank last year.

The demolitions took place in Area C, which is home to 300,000 Palestinians, comprising Bedouin and herding communities who mostly live in tents, caravans, and caves.

Under the 1995 Oslo Accord between Israel and the Palestinian Authority, the West Bank, including East Jerusalem, was divided into three parts — Area A, B, and C.

In a related development, Israeli forces detained 16 Palestinians in overnight raids in the West Bank, according to the Palestinian Prisoner Society.

The NGO stated that the detainees include Khaled Tafesh, 55, a leading Hamas member.

According to Palestinian estimates, at least 4,400 Palestinians are currently languishing in Israeli prisons, including 39 women and some 155 children.