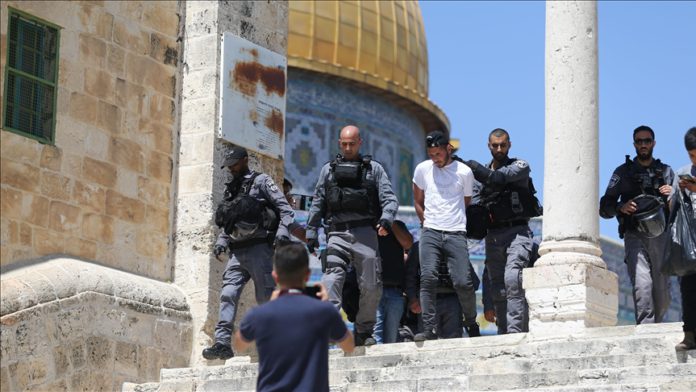 Two Palestinians were injured by Israeli police inside the Al-Aqsa Mosque complex on Friday when they were protesting Israeli settlers’ blasphemy of Prophet Muhammad during their flag march on Tuesday.

According to the Palestinian Red Crescent Society, its teams provided initial medical assistance to two injured people and referred them to hospital.

When they were leaving the mosque, Israeli police detained a number of Palestinians.

In retaliation, Palestinians pelted Israeli police with stones near the western wall of Al-Aqsa Mosque.

Following Friday prayers, a rally was held inside the Al-Aqsa Mosque square to protest the insults directed at Prophet Muhammad during Israel’s provocative flag march on Tuesday.

During his Friday sermon at the mosque, Sheikh Yousef Abu Sneinah condemned Israeli settlers’ insults to the Muslim prophet and attack on the mosque on that day.

The Israeli march was originally planned for May 10 to mark what the Israelis call the day of unifying Jerusalem, in reference to Israel’s occupation of the city in 1967, but it was canceled amid tensions that escalated into 11 days of fighting between Israel and Palestinian resistance factions in Gaza. The fighting came to a halt under an Egyptian-brokered truce on May 21.

Israel occupied East Jerusalem, where Al-Aqsa is located, during 1967 Arab-Israeli War. It annexed the entire city in 1980, in a move never recognized by the international community.