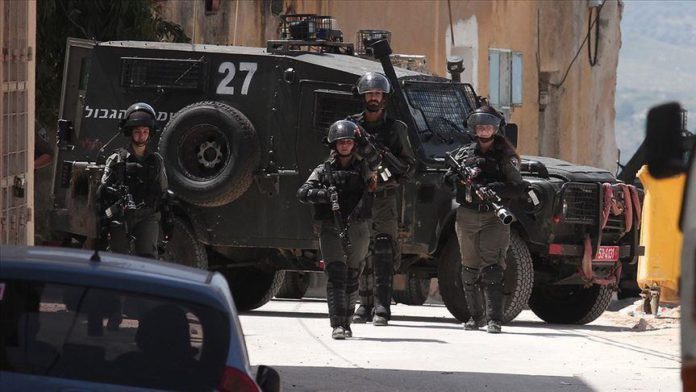 Israeli forces fired tear gas along with plastic and live ammunition to disperse demonstrators in Kafr Malik. Palestinians responded with stones and slingshots.

Anadolu Agency cameraman Hisham Abu Shaqrah filmed Israeli soldiers enjoying target practice on Palestinians after a member of the armed forces hit a demonstrator in the leg with a close-range shot.

Israeli soldiers could be seen on video celebrating the injury to the demonstrator, laughing and hugging each other. The footage also shows the wounded protester being taken to an ambulance.

There are more than 250 illegal Jewish settlements in the West Bank that was occupied by Israel in 1967. The population of Jewish settlers residing there tops 400,000.

All Jewish settlements located in occupied territories are illegal, according to international law.

Citing “security” concerns that emerged following the second Intifada, or uprising, which erupted in 2000, Israel built a wall between the West Bank and Israel in 2002.

About 3 million Palestinians in the West Bank are unable to cross into occupied eastern Jerusalem and Israel because of the wall.

Palestinians have staged protests against the wall and illegal Jewish settlements every Friday but Israeli forces have responded with live, rubber ammunition, tear gas and water cannons.