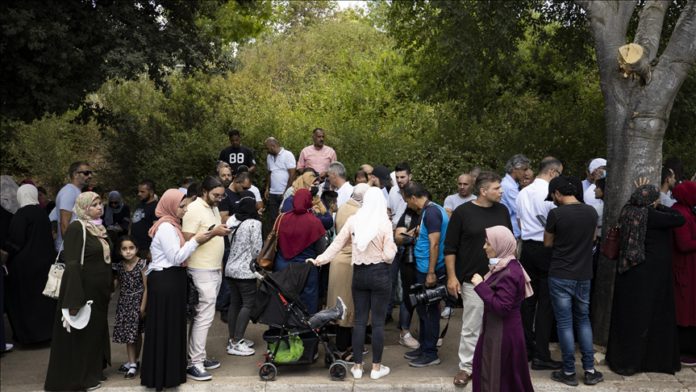 Like many other Palestinians, Mahmoud Abu Qwaider and his family have suffered for decades due to an Israeli law that threatens to split them asunder just because his wife of 20 years is from a town in the Gaza Strip.

Abu Qwaider, from the city of Beersheba in southern Israel, is an Israeli citizen of Palestinian origin, while his wife, who holds Palestinian citizenship, has been struggling with him to obtain residency permits in Israel.

“I got married in 1992 and have seven children, four of whom are daughters, and all of them have Israeli IDs. But, my wife doesn’t have an ID, and all of our requests have been rejected,” Abu Qwaider told Anadolu Agency.

Abu Qwaider’s requests to be reunited with his wife were rejected under the temporary family unification law that was enacted in 2003 and is extended annually, according to which Israel can reject requests by Palestinian families for unification.

Prior to the law’s enactment, Israeli authorities still refused to unify Arab families, under security pretexts.

On Tuesday, the Israeli government failed to secure the law’s yearly passage during a session of the country’s parliament, known as the Knesset.

The extension of the ban failed as it received only 59 votes out of 120 votes.

Adalah, a legal center for Arab minority rights in Israel, says the law prevents unification in Palestinian families where one member holds Israeli citizenship and the other does not, residing in the West Bank or Gaza Strip, or in countries that Israel considers an “enemy state,” such as Syria, Lebanon, Iraq, and Iran.

Thousands of Palestinians have suffered as a result of the law, which the Israeli government claims was enacted for security reasons. Palestinians consider the law “racist.”

“This law is considered one of the most racist laws in the world, so it should be deleted immediately,” Adalah said in a previous written statement.

“There is not a single country in the world that chooses to settle and reunify the husbands and wives of its citizens according to their national and ethnic affiliation, and by classifying them as an enemy,” it added.

Abu Qwaider says his wife, who could not obtain an Israeli identity card due to this law, “is unable to move, perform the Hajj, or even go to Jerusalem. Her mother died and she was unable to participate in the funeral and she remains at home.”

“She doesn’t have any card with her except the Palestinian card, and in many cases, I’m afraid that if we go out together, the police may stop her, arrest her and return her to Gaza,” he said.

Abu Qwaider pointed out that the Israeli Interior Ministry has refused his repeated requests to get his wife a residence permit without giving the reasons for the decision.

“They say that its rejected, and they don’t explain the reason,” he said. “I don’t know why this law (exists), because she has children with Israeli identities. How long will this law remain? This is a racist law.”

The law does not apply to Jewish people around the world.

“They (Jewish people) come from Russia and Ethiopia and the passport and ID are (ready) waiting for them. Are they human and we’re not?”

The same predicament has befallen Manal Abu Nab. Originally from Jordan, she lives with her husband and children in the Ras al-Amud neighborhood of occuppied East Jerusalem.

“I was a resident of Jordan. I married my Jerusalemite (husband) 28 years ago, and my family was being reunited. Then, there were some small problems, and they stopped the reunification,” Abu Nab told Anadolu Agency.

“I’ve been suffering from this situation for 28 years. I’m a resident of Jerusalem, but I’m locked up in the house, so I don’t go out of the house, and if I get sick, I go to the doctor and go back to my house,” she said.

And Abu Nab went on to say: “I can’t leave the house with my children and imagine that for 28 years you’re be a prisoner of your home. So, I can’t participate in events, weddings, or condolences.”

For many years, Abu Nab tried to renew the family reunification, but to no avail.

“We tried through the court and the lawyers, and the answer was always, no,” she said. “I have five children, the youngest of whom is 18 years old, and they have ID cards because they’re dependent on their father, but I don’t have residency.”

As a result, Abu Nab is unable to see her family in Jordan.

“I haven’t been able to visit my family in Jordan for 28 years because if I travel to Jordan, I won’t be able to return to Jerusalem,” she said. “This is my problem and I hope to get residential rights.”

On why her family was refused reunification, Abu Nab said: “There’s no security problem but my only problem is that my husband married another woman and they considered this polygamy. As punishment for my husband, I was punished.”

For her part, Samar Abu Juwaid, who lives in the town of Arara in northern Israel, is better off than Abu Qwaider and Abu Nab, but is also suffering.

“I came from Ramallah in the West Bank and have been married for 24 years. I have an ID that is renewed every two years, but if I want to visit my family in the West Bank, I have to go through the Israeli checkpoints,” she told Anadolu Agency.

“My sons pass (through) normally, but I’m searched by the Israeli army and am unable to travel.”

“I became a grandmother now and I still suffer from the same problem. Recently, I went to the Israeli Interior Ministry and told them I wanted to renew my ID so I could move, and the response was that they’re waiting for the Knesset’s response,” she said.

Abu Juwaid asked: “What law is this that forces me every two years to renew my ID? My daughter got married and became a teacher, and I became a grandmother, and I’m still renewing my identity.”

“For 21 years, I have renewed the identity card every two years, and they always ask for proof. I have two sons and five daughters, and they all have IDs, but I don’t.”

She added: “I’m prohibited from going to perform Umrah (minor Islamic pilgrimage), as I don’t have an Israeli passport.”

'International Women's Day has no meaning in Syria'