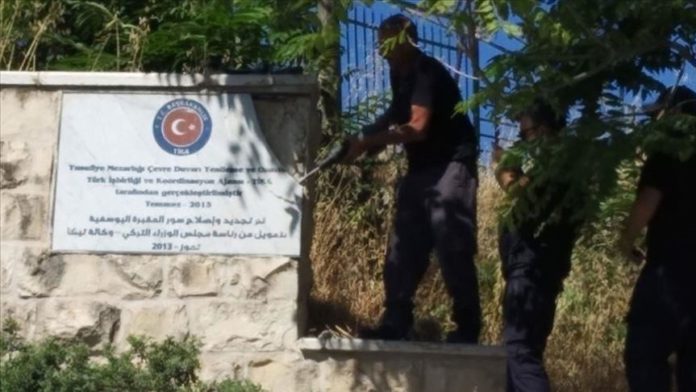 Official documents disprove Israel’s claim that a Turkish aid agency plaque was put up at a historic Muslim cemetery in occupied East Jerusalem without permission.

The plaque marked the completion of a Turkish Cooperation and Coordination Agency (TIKA) restoration project at Yusufiye Cemetery, one of the oldest Muslim graveyards in occupied Jerusalem, and had been there for 10 years before Israeli officials removed it on Wednesday.

Contacted by Anadolu Agency, the Israeli-run Jerusalem Municipality claimed the plaque was removed because “it was placed without permission,” but official documents disprove this pretext.

Documents accessed by Anadolu Agency on Thursday contain all details of the restoration project carried out by the Committee for the Preservation of Islamic Cemeteries in Jerusalem and funded by the Turkish agency.

They show that all required approvals were obtained from the municipality, also specifically referring to permission to place a plaque with details of the project and the name of the contractor.

Mustafa Abu Zahra, head of the Committee for the Preservation of Islamic Cemeteries in Jerusalem, said the plaque had been on public display since 2010, and Israeli authorities had not raised any objections in a decade.

He said the municipality had never even asked the committee about the plaque.

TIKA had funded the rebuilding of the Yusufiye Cemetery’s walls – 700 meters long and five meters high – as part of the restoration project.

He also confirmed that the project was carried out with the approval of all Israeli and Palestinian authorities concerned.

Several Israeli far-right groups have recently launched a campaign against Turkey’s presence and support for Palestinians in occupied East Jerusalem.

The West Bank, including East Jerusalem, is seen as occupied territory under international law, making all Jewish settlements there illegal.

UN condemns Israel most in 2020, 3 times rest of world