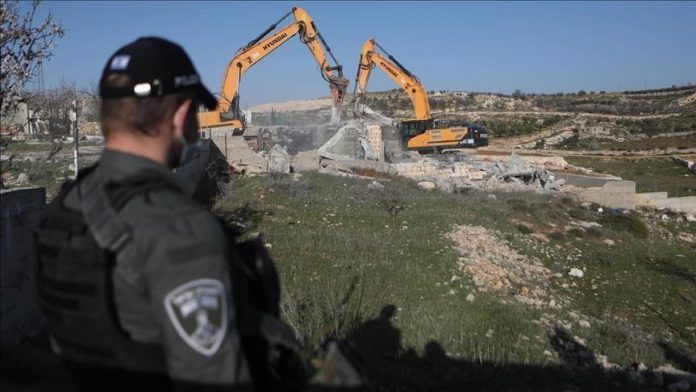 Israeli forces on Wednesday demolished eight Palestinian homes in the occupied West Bank, displacing dozens of their residents, according to a local activist.

Fouad al-Amour, coordinator of the Protection and Resilience Committee in the southern West Bank, said the demolitions took place in the Sha’ab al-Butm and Lassifer communities, east of Yatta town.

He said the Sha’ab al-Butm community was subjected to “violation by the occupation forces, which bulldozed four inhabited homes in the area.”

The activist said the demolished houses, with areas ranging between 35 and 40 square meters, were built of stones and bricks and roofed with tin.

“The demolition of these homes have left around 35 people, including children, homeless,” he added.

In the Lassifer community isolated by the Israeli separation barrier, Al-Amour said Israeli forces brought down four houses, in addition to a barracks used for agricultural purposes.

“These houses were inhabited by around 30 people,” he added.

Israel began building the separation wall between the West Bank and Israel in 2002, and the Palestinians call it the “apartheid wall”.

Al-Amour said Israeli forces cited lack of a building permit in Area C for the demolitions.

Israel widely uses the pretext of lack of construction permits to demolish Palestinian homes, especially in Area C in the occupied West Bank, which constitutes around 60% of its space.

Under the 1995 Oslo Accords between Israel and the Palestine Liberation Organization (PLO), the West Bank, including East Jerusalem, was divided into three portions – Area A, B, and C.

Area C is under Israel’s administrative and security control until a final status agreement is reached with the Palestinians.