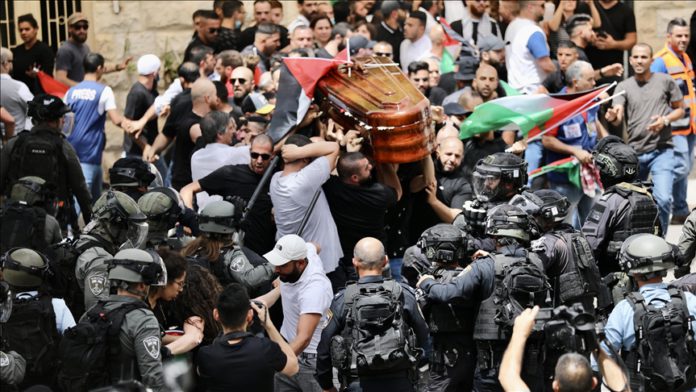 A police statement cited by The Times of Israel newspaper said the investigation was opened upon orders from Police Commissioner Kobi Shabtai and Public Security Minister Omer Barlev.

“The Israel police will be looking into the events that ensued during the funeral,” the statement said.

The Israeli move came in the wake of international condemnations of the police attack on mourners during Abu Akleh’s funeral using batons and stun grenades, which almost caused the toppling of the coffin.

Police said the results of the investigation will be presented to officials in the coming days.

On Friday, Israeli police surrounded mourners and used stun grenades and batons to assault pallbearers carrying Abu Akleh’s casket as it was being carried out of the French hospital in East Jerusalem’s Sheikh Jarrah neighborhood.

Abu Akleh, a veteran 51 year-old journalist, was covering an Israeli military raid near the Jenin refugee camp in the occupied West Bank when she was shot dead on Wednesday. Palestinian officials and her employer, Al Jazeera, say she was murdered by Israeli forces.

Missile attacks reported near US Embassy in Baghdad