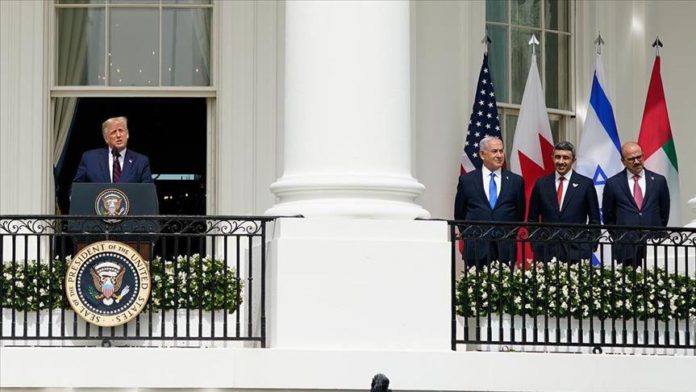 Israel formally signed historic deals Tuesday to normalize diplomatic ties with the United Arab Emirates (UAE) and Bahrain during a White House ceremony presided over by US President Donald Trump.

Ahead of the signing of what has been dubbed the “Abraham Accords,” Trump said the agreements would end “decades of division and conflict” in the region, and usher in the “dawn of a new Middle East.”

“Thanks to the courage of the leaders of these three countries we take a major stride toward a future in which people of all faiths and backgrounds live together in peace and prosperity,” Trump said addressing hundreds of guests assembled for the event in the South Lawn.

“Together these agreements will serve as the foundation for a comprehensive peace across the entire region,” he added as Israeli Premier Benjamin Netanyahu, Emirati Foreign Minister Sheikh Abdullah bin Zayed al-Nahyan, and Bahrain’s top diplomat, Abdullatif bin Rashid Alzayani looked on.

Prior to the ceremony, Trump said five nations are “very far down the road” to normalizing relations with Israel. He did not elaborate on who but Netanyahu said Trump is “lining up more and more countries.”

“This was unimaginable a few years ago, but with resolve, determination, a fresh look at the way peace is done, this is being achieved,” the Israeli leader said to cheers from the crowd.

Outside the White House, pro-Palestinian activists held demonstrations opposed to the accords. The normalization deals have drawn widespread condemnation from Palestinians, who say such agreements do not serve the Palestinian cause and ignore their rights.

Pakistan: Pvt. sector will be allowed to import vaccine