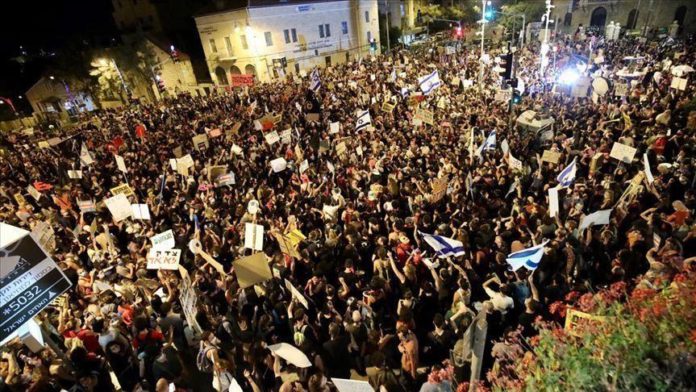 Thousands of protestors gathered on Saturday in Israel to demand Prime Minister Benjamin Netanyahu step down ahead of elections next month.

Demonstrators in front of Netanyahu’s residence in Jerusalem were attacked by supporters of the prime minister, according to state-owned KAN TV.

Protesters in Tel Aviv and Caesarea chanted slogans against Netanyahu, who is on trial for corruption and fraud.

Protests regarding general elections set for March 23 have been continued for 37 weeks. Demonstrators have demanded the resignation of the prime minister because he is the subject of corruption cases and his failed management of the coronavirus pandemic.

Netanyahu appeared on Feb.8 in Jerusalem District Court for the resumption of his trial. He has repeatedly denied the accusations.

His first trial session was held last May, then it was followed by another session in July before the trial was postponed due to the coronavirus lockdown.

Netanyahu is preparing to run in the general elections, the country’s fourth round of polls in two years.

He is heading the right-wing Likud party and is the longest-serving prime minister in Israel with more than 14 years in office.