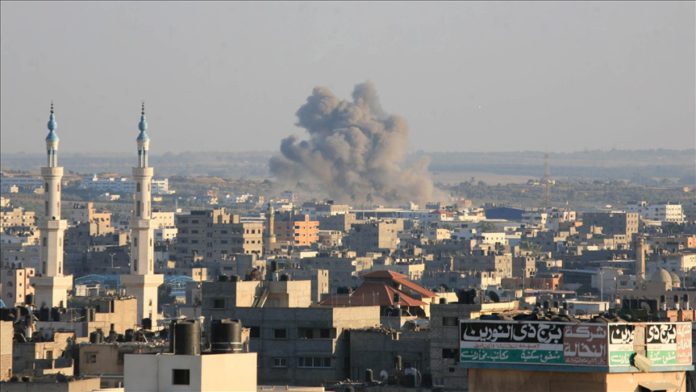 Israeli attacks on Gaza “violated the laws of war and apparently amount to war crimes,” the New York-based rights group said in a report.

HRW added it “investigated three Israeli strikes that killed 62 Palestinian civilians where there were no evident military targets in the vicinity.”

At least 260 Palestinians were killed and thousands injured in 11 days of Israeli airstrikes in the Gaza Strip in early May against the backdrop of an Israeli court ruling to evict Palestinian families from their homes in the Sheikh Jarrah neighborhood in occupied East Jerusalem. Thirteen Israelis were also killed by Palestinian rocket fire from Gaza.

HRW said it conducted one-on-one interviews with 30 Palestinians who witnessed Israeli attacks and were related to the slayed civilians.

The rights group also visited sites hit by airstrikes and analyzed satellite imagery, video footage, and photographs taken after the attacks, which showed deliberate targeting of civilians that claimed lives of dozens of innocent people, including women and children.

“The Israeli military said it was targeting tunnels and an underground command center used by armed groups,” the report said, but added that Israel failed to present “details to support that claim.”

HRW said its request for permits to enter the blockaded Gaza for investigation were rejected by Israeli authorities.

On May 30, request for permits “for senior Human Rights Watch researchers to enter Gaza to conduct further investigation of the hostilities” were submitted to the Israeli authorities but were rejected on July 26.

“Israeli authorities have since 2008 refused access to Gaza for Human Rights Watch international staff, except for a single visit in 2016,” HRW said.

The rights group called on countries providing military support to Israel to make sure the Jewish state complies with laws of war.

“Israel’s partners, particularly the United States, which supplies significant military assistance and whose US-made weapons were used in at least two of the attacks investigated by Human Rights Watch, should condition future security assistance to Israel on it taking concrete and verifiable actions to improve its compliance with the laws of war and international human rights law, and to investigate past abuses,” the report said.

“Deliberate attacks on civilians and civilian objects are prohibited. The laws of war also prohibit indiscriminate attacks, which include attacks that do not distinguish between civilians and military targets or do not target a military objective,” HRW said.

Commenting on the report, Hamas said the Palestinian people “exercise their legitimate right to resist occupation, within the framework of international law, with the means available to them.”

“The resistance showed its utmost keenness to avoid targeting civilians despite all the massacres committed by the enemy [Israel] against children and women,” Hamas senior fıgure Basem Naim said.

He praised HRW for exposing Israeli violations, noting that the report reaffirms that Israel, through US support, is acting “above the law” to commit “the most heinous crimes.”