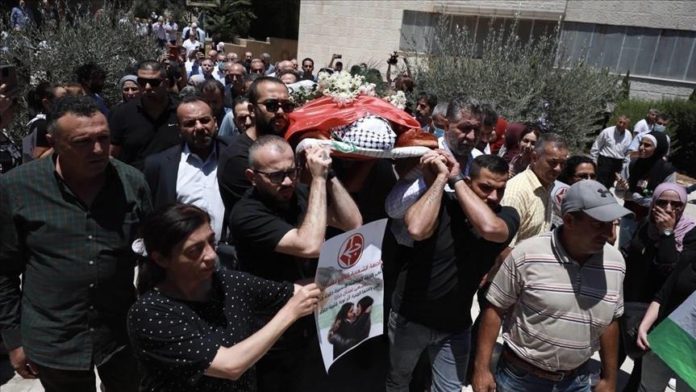 Israeli authorities have rejected calls to allow a Palestinian detainee to attend her daughter’s funeral.

“They deprived me from your farewell with a kiss, so I farewell you with a flower,” jailed Palestinian lawmaker Khalida Jarrar wrote in a funeral flower message.

On Sunday night, Suha Jarrar, 31, died of a heart attack amid calls by rights groups for Israeli authorities to allow her mother Jarrar to attend her daughter’s funeral.

Suha’s funeral took place on Tuesday afternoon in al-Bireh city in the central West Bank, with the participation of Palestinian officials and leaders of factions.

The funeral procession was aired via the official Palestine TV to allow the bereaved mother to watch it from her prison cell.

On Monday, Farhan Haq, the deputy spokesperson for the UN Secretary General, called on the Israeli authorities to grant Jarrar a “compassionate leave” to attend her daughter’s funeral.

“I would also point out that we have called for all those in detention to be tried promptly and to face due process or otherwise to be released,” Haq added.

Khalida Jarrar is a prominent leader in the Popular Front for the Liberation of Palestine (PFLP), the second largest group in the umbrella Palestine Liberation Organization (PLO). She was elected a member of the Legislative Council (parliament) in the last parliamentary elections held in 2006.

Jarrar was detained from her home in the West Bank city of Ramallah on Oct. 31, 2019, and was accused of membership in the PFLP, a group banned by the Israeli military.