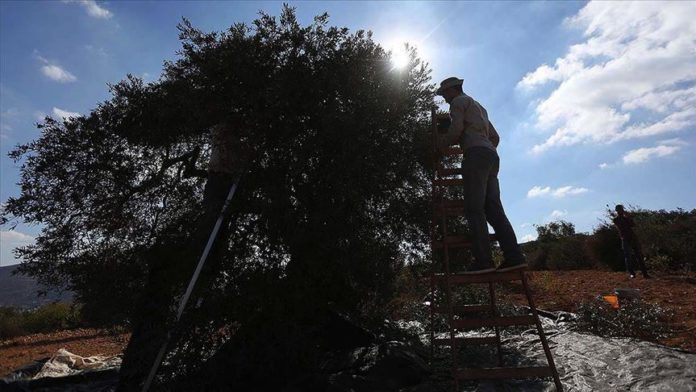 The Israeli authorities issued 20 military orders preventing Palestinians from entering olive gardens in the occupied West Bank, according to a Palestinian official.

Walid Assaf, the head of the National Committee to Resist the Wall and Settlements affiliated with the Palestine Liberation Organization, told Anadolu Agency Monday that the Israeli authorities issued the decisions preventing Palestinians from entering their own lands “despite the attacks of Jewish settlers on agricultural lands belonging to Palestinians.”

He pointed out that based on these decisions, Israel aimed to seize hundreds of acres of Palestinian lands.

While there was no comment from Israeli authorities on the official’s claims yet, they generally explain such steps citing “security reasons”.

Since the olive harvest began on Oct. 7, Jewish settlers have been carrying out attacks against the farmers in various places in the occupied West Bank.

Benjamin Netanyahu has asked for the Israeli Supreme Council for Planning and Building to be convened in the West Bank after the end of the Jewish holidays in early October.

The Israeli government has neither confirmed nor denied the development.

In recent weeks, Israeli settler leaders have protested against Netanyahu’s failure to push the council to approve settlement projects.

Peace Now, a non-governmental Israeli movement, said the government has approved the construction of 3,412 settlement units in eastern Jerusalem.

According to the group, more than 428,000 settlers are living in 132 settlements and 124 random settlement outposts in the occupied West Bank.

It said the figure does not include the 18 settlements in East Jerusalem that are occupied by more than 220,000 settlers.