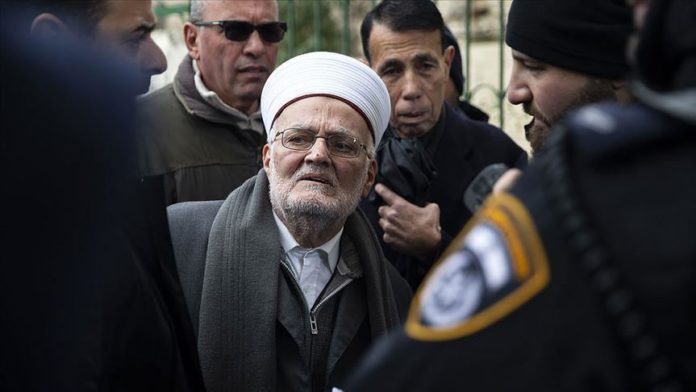 “Israeli police raided my home on Thursday and handed me an order banning me from entering the Al-Aqsa mosque for four months,” Sheikh Ekrima Sabri told Anadolu Agency.

“Muzzling and targeting the Al-Aqsa mosque is the nature of the Israeli occupation, which contradicts the freedom of worship and Israel’s of being a democratic state,” he said. “But we will stay with Al-Aqsa, and we will defend the Al-Aqsa.”

Israeli authorities accuse Sheikh Sabri of incitement because of his positions aimed at preserving the “Islamic identity of the Al-Aqsa Mosque.”

This January they handed him deportation order from the mosque, which is one of the holiest sites in Islam.

Israel occupied East Jerusalem, where the mosque is located, during the 1967 Middle East war.

In a move never recognized by the international community, it annexed the entire city in 1980, claiming it as the self-proclaimed Jewish state’s “eternal and undivided” capital.

Jews refer to the area as “Temple Mount,” claiming it was the site of two prominent Jewish temples in ancient times. Jerusalem also includes Church of the Holy Sepulchre, one of the most sacred Christian sites in the world.

The compound reopened to worshippers and visitors on May 31 after more than two months of closure due to the coronavirus pandemic.