The Syrian Arab News Agency (SANA) said the attack was directed from the occupied Syrian Golan Heights against some military sites, adding the country’s air defenses shot down most of the missiles before they reached their targets.

Since the beginning of the Syrian crisis in 2011, Israel has carried out hundreds of airstrikes against targets in Syria, including on Assad regime military sites and Iranian-backed groups. 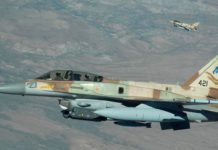