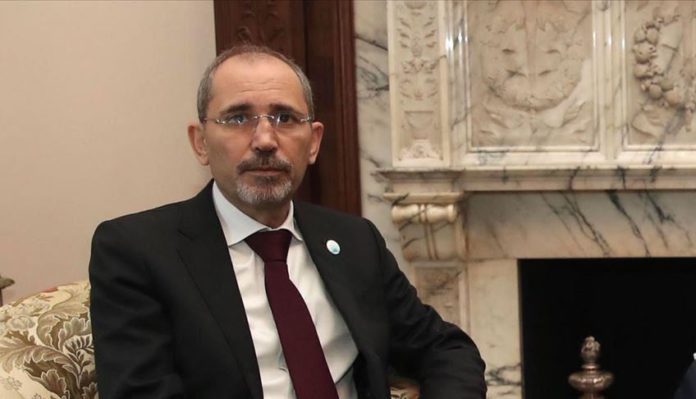 Jordan on Wednesday warned against Israeli plans to annex parts of the occupied West Bank, describing the move as “catastrophic”.

According to a statement by the Jordanian Foreign Ministry, the talks touched on Palestinian developments and the economic and social impact of the coronavirus pandemic.

The chief diplomats agreed during the talks on rejecting any Israeli move to annex any occupied Palestinian territory in violation of international law, a step that undermines the two-state solution, the statement said.

“Any Israeli decision to annex settlements, the Jordan Valley and north of the Dead Sea in occupied Palestine will be catastrophic and will kill any possibility to achieve just peace,” Safadi said.
Israel is expected to carry out the annexation on July 1, as agreed between Prime Minister Benjamin Netanyahu and head of Blue and White party Benny Gantz.
Palestinian officials have threatened to abolish bilateral agreements with Israel if it goes ahead with the annexation plans, which will undermine the two-state solution.
The annexation comes as part of US President Donald Trump’s so-called “deal of the century” plan, which was announced on Jan. 28. It refers to Jerusalem as “Israel’s undivided capital” and recognizes Israeli sovereignty over large parts of the West Bank.
The plan states the establishment of a Palestinian state in the form of an archipelago connected by bridges and tunnels.
Palestinian officials say that under the US plan, Israel will annex 30-40% of the West Bank, including all of East Jerusalem.
The plan has drawn widespread criticism from the Arab world and was rejected by the Organization of Islamic Cooperation, which urged “all member states not to engage with this plan or to cooperate with the US administration in implementing it in any form.”
*Ahmed Asmar contributed to this report from Ankara