TurkishPress
Home News Is liberation of Libya’s south from Haftar’s grip in the pipeline? 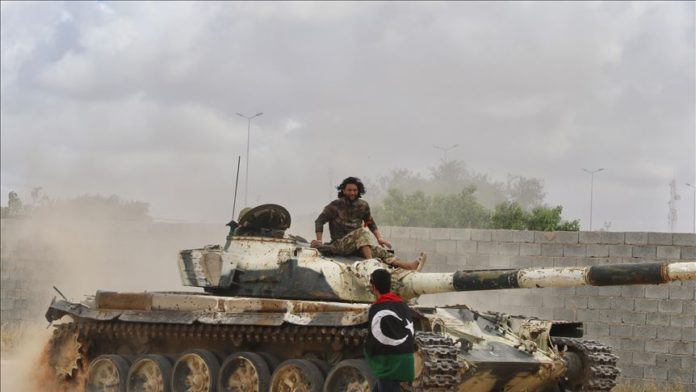 Residents of the western Libyan city of Sabha have publicly defied eastern warlord Khalifa Haftar for the first time since the militia leader captured the capital of Fezzan region in January 2019.

In a move that could be a turning point in the Libyan conflict, tribal leaders and revolutionaries in Sabha have announced their support to the internationally recognized Libyan government.

The move reflects that Haftar’s “iron grip” on the city has relaxed and highlights the possibility of the collapse of his militias in the region at any moment.

Haftar’s militias only control main cities, airports, military bases and oilfields in Fezzan, leaving behind all other towns and the region’s vast desert.

The militia leader’s main focal point in Fezzan is the Brak al-Shati airbase, 50 kilometers north of Sabha, which is controlled since 2016 by militants loyal to late Libyan ruler Muammar Gaddafi.

There are also Al-Jufra base, northeast of Sabha, and Tamanhint base after the withdrawal of Misrata forces from there in 2017.

The entire region has fallen to Haftar’s militias after the warlord took control of three main military bases in Fezzan despite the presence of local forces affiliated with the Libyan government and tribal forces, which have their own agenda in the region.

It took Haftar two years to move into Fezzan region, taking advantage of clashes between Arab tribes and Toubou tribes backed by Chadian gunmen, which helped the warlord to capture most of the region as well as El-Sharara and Al-Feel oilfields in less than three months.

By controlling Fezzan region, Haftar aimed to secure his supply lines against any attack on his backyard bases while moving on Tripoli and to show to his backers that he was in control of most of the Libyan territory.

But Haftar’s move to dispatch his forces south of Tripoli has made the security situation in the Fezzan region fragile. That was evident when the Toubou tribe managed to capture the city of Murzuq, south of Sabha, and when Libyan government forces liberated the town of Ghadduwah near Sabha.

Libyan government forces were also able to control Al-Feel oilfield near the city of Awbari before Haftar used his warplanes to regain control of the field.

And although the militia leader pulled out some of his forces from the battlefield in Tripoli and his warplanes committed massacres against civilians, Haftar lost Murzuq city to the Toubou fighters affiliated with the Libyan government.

Tragic reality in the south

Fezzan region accounts for around one-third of Libya’s territory. It has the country’s largest oilfields (El-Sharara and Al-Feel oilfields) as well as a huge water reserve that quenches the thirst of the population of the north.

In spite of all these huge potentials, the region’s 700,000 population are suffering from a catastrophic fuel crisis.

According to a report by the Libyan National Oil Corporation last week, Sabha’s stockpiles of fuel, gasoline and cooking gas amounted to zero.

Residents of Fezzan have been crying for help amid the failure of Haftar and the unrecognized government of Abdullah Al-Thani in eastern Libya to secure the region’s needs of fuel and food.

Last week, the Libyan government ordered the suspension of relations with the Sabha municipal council due to its support for Haftar, further isolating the city.

The collapse of Haftar’s militias in the western region seems a matter of time. This was even clear in statements by Aguila Saleh, Speaker of east Libya-based parliament, who said the situation in the region was “on the brink of abyss” when asked by a Russian reporter to describe the situation there.

Another indication on Haftar’s imminent fall was the withdrawal of forces affiliated with the Zintan Brigade from Al-Watiya airbase, southwest of Tripoli.

Two lawmakers and a member of the Supreme State Council also appeared in a video by Zintan tribal chieftains to disavow Haftar, indicating that the militia leader has lost his biggest backer in western Tripoli and that the fall of the Al-Watiya airbase was imminent.

If that happens, the isolated city of Tarhunah, 90 km southeast of Tripoli, will be the only remaining city in Haftar’s hands and its fall will definitely mean the collapse of Haftar’s militias south of Tripoli.

As Fezzan is historically, geographically and logistically linked to Tripoli, the fall of the entire western region would mean that airbases, oilfields and major cities in Fezzan will be the next target of the Libyan government forces.

Given the open terrain and the region’s hinterland nature and its small population, warplanes would be a vital and decisive factor in the battle for control.

And as the Libyan government forces in Fezzan don’t have airbases close to the areas under their control, it is quite possible for these forces to start by liberating Al-Jufra airbase before moving on toward Sabha and Brak al-Shati.

Government forces have many supporters and allies in the south such as the February 17 Revolutionaries and gunmen from Tuareg and Toubou tribes. It is quite sufficient to only support them with drones and battalions from Misrata, Zintan and Zawiyah.

The unrest in the western region and the split in Haftar’s camp in the eastern region after the refusal of Aquila Saleh to authorize Haftar to rule the country would open the door wide for the residents of Libya’s south — with the support of the Libyan government — to take the initiative to get rid of Haftar’s militias.

No new Ebola cases reported in DR Congo's province: WHO