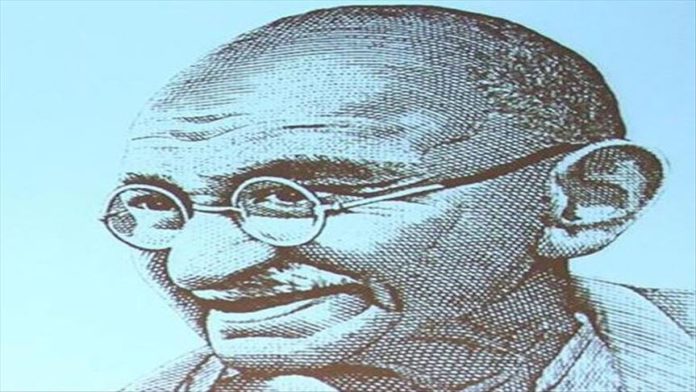 They point out that over the past few years, democratic movements in his own country, India have been met with a heavy hand by the government.

Gandhi, who began his tryst with political movements in South Africa, helped India gain freedom through his philosophy of non-violence and non-cooperation. But, despite being revered as “the Father of the Nation,” at home and projected as a moral compass across the world by Indian diplomacy, the country has violently responded to peaceful protests in the past year.

Earlier this year, the Indian capital New Delhi witnessed large scale violent incidents as people protesting “peacefully “against the Citizenship Amendment Act (CAA) were beaten up and baton-charged by police. The capital also witnessed one of the worst ever communal riots, claiming over 50 lives.

Speaking to Anadolu Agency, prominent Gandhian TRN Prabhu, president of Sevagram Ashram, a town dedicated to Gandhi, said the current political regime in India is based on communalism and thus does not allow agendas of non-violence to survive.

In April 1936, Gandhiji had established his residence and spiritual hermitage in the village of Sevagram in the western state of Maharashtra, where he also employed lower caste Hindus called Dalits to cook food, to break the caste barrier.

“The government today is quite similar to the British colonial regime, an autocracy. Any conflict of words and thoughts can land one into trouble. The dissenters, however, need to focus on the responsibility of awareness. They should keep the dialogue going,” said Prabhu.

He added that it is because of this conflict of thoughts and pressure that a lot of suicides are happening in the country now.

Akshat Seth, general secretary of the Students’ Federation of India (SFI), said it is difficult for today’s dissenters to follow the Gandhian approach of resistance.

“We’ve seen students being incarcerated and beaten up for sitting in silent peaceful protests or for only being present at the protest sites. We moved our protests online after the pandemic started, but our account on Twitter was blocked, citing ‘violation of Indian laws,'” said Seth.

He added that the crackdown was forcing protestors to turn aggressive in their protests. The government’s oppression and state machinery’s utilization to curb dissent has led to resistance.

The theme of the protests was coined from young poet and activist Amir Aziz’s poem Sab Yaad Rakha Jayega, which translates to everything that will be remembered.

Disregarding the term “violent” for the resistance, the dissenters also believe that fighting for their rights is the right thing to do and it is thus not violence but the survival of the fittest.

“If I am stealing from a shop out of hunger, would you call me an agitator? Gandhi undertook mass mobilization, and thus his movements/resistances were recognized. Peaceful agitations are not being recognized these days. The state is oppressing people fighting for their rights,” said Mohammed Asif, an activist, and protestor against the citizenship law.

He added that the definition and interpretation of violence vary. An agitation for your rights is not violent; the whole point is that the concept behind it should be peaceful.

Asif had set up a library at the protest site in Delhi’s Shaheen Bagh area, where he lent out books of Gandhi, Indian novelist and short story writer Ismat Chughtai and Lebanese-American writer and poet Khalil Gibran.

“Gandhi’s ideology was freedom. This fight with the government is about ideology, and for this, we have to strengthen our ideas. To do that, we need to read more books,” said Asif.

Gandhi believed that self-rule should extend to all people, rich and poor, male and female, and thus he encouraged women to participate in his freedom movements and political discussions.

Keeping this in mind, Asif named the Shaheen Bagh library The Fatima Sheikh-Savitribai Phule Library, after two women educators and social reformers who fought for women’s rights and their access to education. The library, initially, lent out books only to women, but later opened up for men as well.

In December, the Indian government amended its citizenship law through CAA, which led to protests across the country. The law seeks to grant citizenship to Hindus, Sikhs, Buddhists, Christians, Jains, and Parsis who entered the country from Pakistan, Bangladesh, and Afghanistan before Dec. 31, 2014, leaving out Muslims.

Many young student activists have been arrested under the Unlawful Activities (Prevention) Act (UAPA) since March, including Safoora Zargar, a four-months pregnant Sociology doctorate student for participating in protests.

Several members of the Pinjra Tod women’s student group and Jamia Millia Islamia Coordination Committee are currently behind bars. Jamia Millia Islamia is a central university located in New Delhi and was founded a century ago by Mahatma Gandhi while challenging the British education system.

On Aug. 5, 2019, the Prime Minister Narendra Modi-led Bhartiya Janata Party revoked Kashmir’s special status and converted the state into two union territories. Before the revocation, the government ordered a total communication blackout, shutting down cable TV, landlines, cellphones, and the internet to avoid any backlash.

Article 370 allowed Kashmir some degree of autonomy in terms of having its own constitution and freedom to make laws in certain areas. To preserve the Muslim majority character of the region, the provision also barred other Indian citizens from owning property.

The abrogation led to mass protests nationwide and strong criticism from the opposition. Stone pelting, tear gas, and rounds from pump-action guns were fired to disperse them.

Non-violence is a positive energy

Despite all that the protestors have faced; the Gandhian experts believe it is still important to look for victory through peaceful methods.

“It is important to create awareness among the masses. This can only be done in a peaceful, responsible way. Society as a whole needs to deal with law and order in a non-violent positive way and convince others that this is the right thing to do,” said Prabhu.

Experts in Gandhi’s philosophy also said that a “peaceful protest” does not necessarily mean a Gandhian style of resistance. Protestors also need to let go of their personal agendas and negative energy in the non-violence approach.

Speaking to Anadolu Agency, Rupal Prabhakar, Regional Coordinator at Gandhi Peace Foundation (GPF) said that Gandhi too faced oppression and was put behind bars, but never deviated from his non-violence mission.

“If a government can justify an unconstitutional decision like the CAA, then it cannot be called a democracy. In a scenario like this, it is difficult for any movement to survive. But despite this, it is very important for dissenters to follow the Gandhian approach in good spirit, as that will only help change things in the long term,” said Prabhakar.

She underlined that Gandhi was killed, but his soul remains, and people still talk about him, and thus it is best to follow what he taught the world.