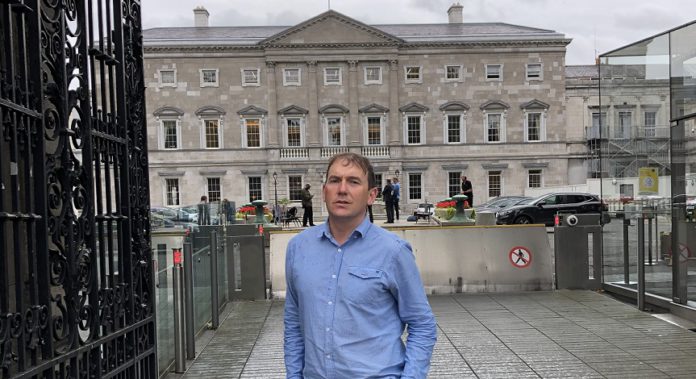 Walking along one of Dublin’s main thoroughfares one notices a Palestinian flag fluttering in the afternoon breeze, raised high and standing alongside its Irish counterpart.

A few feet away, a large painting of a Palestinian flag is emblazoned on the wall of a building, greeting pedestrians, cyclists and drivers.

Venture into the suburbs and one will see a few houses have Palestinian flags hanging from windows.

The Palestinian struggle has long occupied the minds of the Irish and there appears to be a historical connection between the two peoples, a connection that transcends religion, ethnicity and geography. And one that is connected through a shared experience of occupation, oppression and the fight for freedom.

There are many parallels between the two peoples and strong comparisons can be drawn between the Irish and Palestinian struggles.

“In the context of Irish history, there are a lot of parallels between the Irish and Palestinian people,” Gino Kenny, a member of the Irish parliament (TD) for the socialist People Before Profit party, told Anadolu Agency. “In recent years, as more people in Ireland come to know of what has happened and what continues to happen in Palestine, there is certainly more empathy and there has been a further bonding and support of the Irish towards the Palestinian cause.”

“The ongoing occupation of Palestine and the ongoing occupation, or rather political interference, of Northern Ireland by the British government is one of many parallels between these two states as well as the partition of Ireland 100 years ago and the continued breaking up of Palestinian land by illegal settlers. Irish people feel a deep empathy towards Palestinians in relation to their occupation and brutalization they encounter every day as they (Irish) have also faced similar oppression at the hands of the British,” he added.

The Irish understanding of the Palestinian struggle is one based on a similar experience and thus allows for the association with the Palestinian cause and to support the Palestinian people. This support ranges from the average Irish citizen to members and officials of the government and its parliament, or Dail, and indeed one could argue that Ireland is at the vanguard in defending Palestinian rights and holding Israel to account for its crimes and oppression.

Irish sympathies first laid with the Zionist movement in the 1920s and 1930s when Jewish paramilitary groups Irgun, Stern and Haganah waged a terror campaign against the Palestinian population as well as their British colonial administrators in what was then UK mandated Palestine. Irish republicans equated their struggle against the British to Jewish struggles against the same administration in Palestine and championed the Zionist struggle for self-determination.

But following the mass displacement and expulsion of Palestinians by Zionist terrorist groups and the creation of the state of Israel in 1948, Irish perceptions toward Israel began to shift.

Irish independence in 1922 left six northern counties under British rule in what is now known as Northern Ireland. This division has been a point of contention between republicans in the south and unionists in the north and republicans have long held the British responsible for the division of the island of Ireland.

During the 1919-1921 Irish War of Independence, the British government, in an effort to bolster its forces in the country against the nascent Irish Republican Army (IRA), deployed the Black and Tans, a unit of 10,000 men from the UK who were notorious for brutality and indiscriminate acts of violence against innocent Irish civilians. They included arbitrary arrests, burning homes, businesses, farms and community centers and even the mass killing of civilians in acts of reprisals against the IRA.

The Black and Tans were also deployed to Palestine where they were used to brutally suppress the Palestinian revolt.

John Brady, a TD and spokesperson on foreign affairs and defense at opposition Sinn Fein party, said: “I suppose as Irish people, we understand the plight of the Palestinian people because we have a shared history, a history of colonization and of oppression from the same brutal oppressors who were the English and so this (understanding) is steeped in historical linkages right the way back from the colonial period.“

“A lot of people would have heard of the brutal Black and Tans that were being brought to Ireland in the 20th century to try and crush the Irish revolution. They carried out massive amounts of brutal atrocities on Irish people and when we came to an agreement with the British, people always ask. ‘What happened to the Black and Tans?,’ and the reality is a large portion of them went over to Palestine and were used by the British to brutally oppress the Palestinian people. So not only do we have a shared history of colonization but also the same brutal oppressor using the same brutal means,” added Brady.

Similarly, Ireland began to draw parallels between the division of the island to the apartheid policies enacted by successive Israeli governments following their victory in the Six Day War in 1967 that saw Israel capture and militarily occupy East Jerusalem, the West Bank and the Gaza Strip. The illegal occupation of Palestinian land and Palestinians under military law reminded many in Ireland of their horrid experience with the British and to many, Israel now resembled an illegal state established by force with the intent of dominating the indigenous population.

The British governor of mandate Palestine saw the idea of Israel as the “little loyal Jewish Ulster” of the Middle East.

Ulster is the name given to Northern Ireland and republicans view its creation and existence as an attempt to contain Irish nationalism. Similarly, the term “Jewish Ulster” was used to describe the creation of Israel as a British attempt at holding back the tide of Arab nationalism which was ascendant at the end of World War II.

Israel’s brutal occupation of the Palestinian people and its apartheid laws enacted to govern has negatively affected its relationship with Ireland and the latter has increasingly voiced support for the Palestinian cause, decrying the illegal occupation and passing a number of pro-Palestinian laws that has bewildered and infuriated Israeli leaders and lawmakers.

Is Ireland leading the EU in championing Palestinian rights?

As Irish public opinion turned against Israel, so too did the government’s stance. Ireland de jure recognized Israeli independence in 1963, 15 years after its creation and by the late 1960s the government had become increasingly concerned with the fate of Palestinian refugees following the catastrophes of 1948 and 1967.

Following the Six Day War, the mass expulsion and displacement of Palestinians from their homeland became the central focus of Irish Middle Eastern policy.

Since joining the European Union in 1973, Irish governments have been at the vanguard in championing the Palestinian cause within Europe.

In 1980, it was the first EU member to call for the establishment of a Palestinian state and in 1993, was the last to open an Israeli residential Embassy in Dublin.

In response, Israeli governments have accused their Irish counterparts of supporting the Palestine Liberation Organization’s aim to supposedly “destroy the Jewish state.” Despite the accusations, Dublin has always supported a two-state solution with full repatriation of Palestinian refugees.

Yara Alagha, a Palestinian parliamentary researcher in the Dail, talked about how Irish civil society, from the past to the present, has always stood in support of Palestine.

Following the signing of the Oslo Accords in 1993 and 1995, former Irish Foreign Minister Brian Cowen met with PLO leader Yasser Arafat during the height of the second Intifada and described him as “the symbol of the hope of self-determination of the Palestinian people” and, despite a loss of faith amongst Palestinians and the international community in Arafat’s ability to lead his people, Cowen praised him for his “outstanding work, tenacity and persistence.”

A number of laws and motions have been proposed and passed in the Dail by various opposition parties, including Sinn Fein, that targets Israel’s illegal occupation and the continuing settler colonization of Palestinian land.

In 2019, the Occupied Territories Bill 2018, which bans trade between illegal settlements and tabled by the independent TD Frances Black, was passed by the Irish lower house of parliament. Although the bill is yet to be voted into law, its passing is seen as a great victory for the Boycott, Divestment and Sanctions (BDS) movement that aims to apply economic pressure on Israel in an attempt to end its illegal occupation of Palestine.

In May, following Israel’s brutal 11-day attack on the occupied and besieged Gaza Strip that killed hundreds, Ireland became the first EU member state to declare the construction of Israeli settlements in the occupied West Bank as a de facto annexation. The motion was tabled by Sinn Fein and passed by the Dail after receiving overwhelming support from the opposition and the government.

Many feel the Irish government and Dail have not gone far enough in holding Israel to account for crimes against humanity and international law and that although statements of condemnation are welcome, concrete action needs to be taken to bring a halt to the illegal colonization of Palestinian lands — action that includes sanctions and active disengagement with Israel.

Alagha agrees with the public condemnation of Israel as well as the implementation of diplomatic pressure but argues that without economic and trade sanctions as well as meaningful action, the suffering and plight of Palestinians will continue and even get worse.

Similarly, Brady argues that the Irish government is not doing enough to stop the illegal occupation and more action needs to be taken to address the issue.

“The major failure of successive Irish governments is that they have essentially remained silent in terms of action. They have issued statements of condemnation which is absolutely fine but without tangible actions to follow up those statements, those words are meaningless. You can wallpaper the Dail itself with words of condemnation but it has zero impact on the illegal actions of Israel. The Irish government has not taken meaningful action and in fact, they have acted as a blockage to taking those actions,” according to Brady.

Sinn Fein’s Foreign Affairs spokesman Brady believes that the Occupied Territories Bill does not go far enough, arguing that the passing of the motion into law would be a welcome start in making it unlawful to trade with illegal settlements in the West Bank and set a precedent for the international community in ending the occupation and oppression of Palestine. ​​​​​​​

Indeed, when compared to other EU member states and western nations, Ireland has led the way in supporting the Palestinian struggle and standing up for the Palestinian right to self-determination and independence.

Despite the progress, however, it is evident that more needs to be done to bring a halt to the oppression of the Palestinian people which is set to worsen under the new premiership of the far-right and ultranationalist Naftali Bennett.

Ireland, Palestine: A tale of 2 struggles