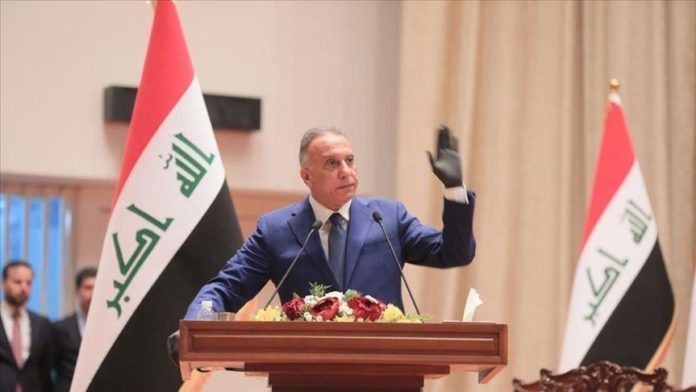 Iraqi Prime Minister Mustafa al-Kadhimi arrived in Riyadh on Wednesday, on his first visit to Saudi Arabia since he took office in April.

The Iraqi premier is accompanied by a large delegation during his visit to the oil-rich kingdom, according to the official Al-Iraqiyya TV.

Earlier Wednesday, al-Kadhimi tweeted that he was traveling to Saudi Arabia to “consolidate the distinguished relations between the two brotherly countries” and to foster regional cooperation.

Hussein Allawi, an adviser to the prime minister, told the official Al-Sabah newspaper that al-Kadhimi’s delegation includes ministers and members of the Iraqi-Saudi Coordination Committee.

“This is an important visit that comes at a very special time”, Allawi said. “The visit will discuss a number of files of interest, including ways to confront crises in the region, economic coordination, and support for development and investment plans presented by the Iraqi National Investment Commission to Saudi companies, and provision of facilities by the Iraqi government to Saudi companies and embarking towards establishing joint projects.”

Last July, Iraq and Saudi Arabia formed a coordination council between the two countries aimed at upgrading bilateral relations in the political, security, and economic fields.

Al-Kadhimi was initially scheduled to visit the kingdom on July 20, but the visit was postponed due to a health setback the king experienced.

Saudi Arabia resumed its diplomatic relations with Iraq in December 2015 after a break of 25 years following the Iraqi invasion of Kuwait in 1990.

Iraq has become a field of competition between Saudi Arabia and Iran, which enjoys close relations with several Iraqi Shia groups.

Russia to take part in joint military drill with NATO

Erdogan arrives in Senegal as part of Africa tour