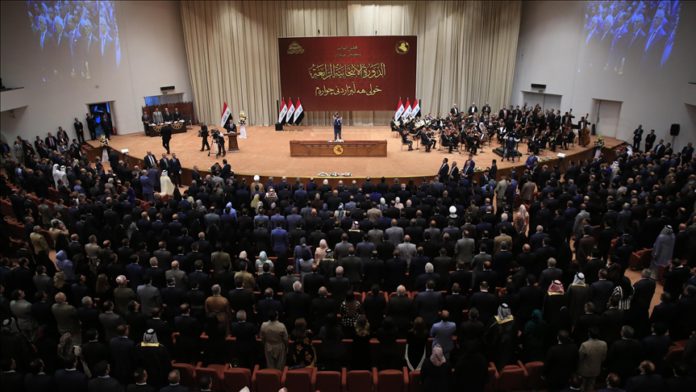 Iraqi leaders on Saturday called on the country’s political blocs to overcome their differences on the formation of a new government.

The call was made on state television by President Barham Salih, Prime Minister Mustafa al-Kadhimi, and Parliament Speaker Mohamed al-Halbousi, shortly after Shia cleric Muqtada al-Sadr’s bloc said it will boycott a planned session on Monday to elect the country’s new president.

“Today, we stand before the aspirations of our people who have long suffered from crises and disasters, wars, tyranny and terrorism, and the time has come to overcome them through good governance,” Saleh said.

The Iraqi leader warned that the “continuation of the status quo is no longer acceptable” and called for “the formation of a new capable government” in a “peaceful” and “democratic” manner.

Al-Kadhimi, for his part, warned of what he called “enemies of Iraq who are betting on the failure of democracy in the country”.

“Democracy is the safest and clearest way to cruise nations towards peace and coexistence,” al-Kadhimi said.

Al-Halbousi, meanwhile, called “for dialogue and integration of roles” in the spirit of brotherhood.

Saturday’s appeal came on the anniversary of the assassination of Mohammad Baqir al-Hakim, the leader of the Supreme Council for Islamic Revolution, who was killed in a bomb attack in 2003 in Iraq’s southern province of Najaf.

Earlier Saturday, Hassan al-Adhari, the head of the Sadrist bloc in parliament, said negotiations with political blocs to form a government will be frozen until further notice.

He also called on his fellow Sadrist lawmakers to boycott Monday’s parliamentary session to elect a new president.

Al-Sadr’s Sairoon Alliance emerged the biggest winner in the Oct. 10 elections, with 73 seats in the 329-member parliament, followed by al-Halbousi’s Taqaddum (progress) bloc with 37 seats.

Macron arrives in Iraq for talks on fight against Daesh