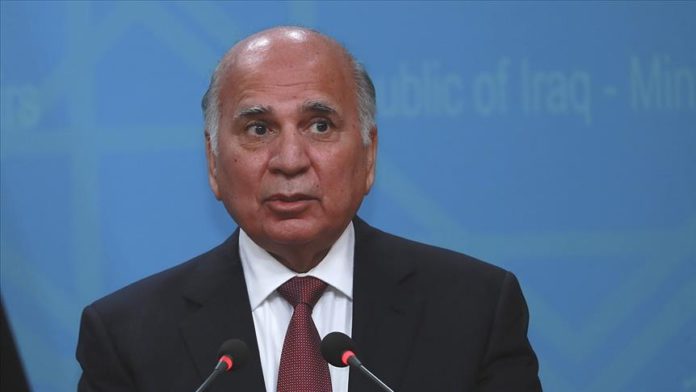 In a meeting with Foreign Minister Javad Zarif, the two officials discussed the “expansion of bilateral ties, besides regional and international issues.”

The top Iranian diplomat told his Iraqi counterpart that his country “rejects destabilizing US aggression against Iraqi forces.”

Hussein’s visit to Tehran came a day after a US airstrike in eastern Syria bordering Iraq targeted the “facilities of Iran-backed militias.”

The Pentagon said the strike, which was strongly condemned by Tehran, was in retaliation to recent attacks on US and coalition forces in Iraq.

The attacks on US troops and supply convoys in Iraq have intensified in recent months with Washington accusing “Iran-backed militia groups” in the country. Iran has, however, repeatedly rejected the claims.

During the meeting, the head of Iran’s Supreme National Security Council told the visiting official that the US airstrike was “part of Washington’s attempt to revive organized terrorism”, the statement said.

“Iran and other countries fighting terrorism will not allow foreign-affiliated Takfiri terrorism to revive in the region,” Shamkhani said, blaming the US for “promoting takfirism” in the region.

The Iranian official also noted with concern “delay in the implementation” of a bill passed by the Iraqi parliament that calls for expulsion of foreign troops from the war-ravaged country.

Among other issues that figured in discussions include Iranian funds in Iraq, which the visiting official said would be released as per an agreement reached between the two sides recently.

Recently, Iran’s state gas company had slashed gas supplies to Iraq over non-payment of dues, before the two countries reached an agreement over the disbursement of outstanding debt.

US sanctions have prevented Iran from accessing its assets in several countries, including Iraq. However, Tehran has recently ramped up efforts to bring back the funds.

It was the Iraqi foreign minister’s second visit to Tehran in February and came two weeks after Iranian judiciary chief Ebrahim Raeesi’s high-profile visit to Iraq.

During the visit, sources said, Raeesi had raised issues of continued US presence in Iraq and progress in investigations into the killing of Iran’s top military commander Qassem Soleimani in a US airstrike early last year.