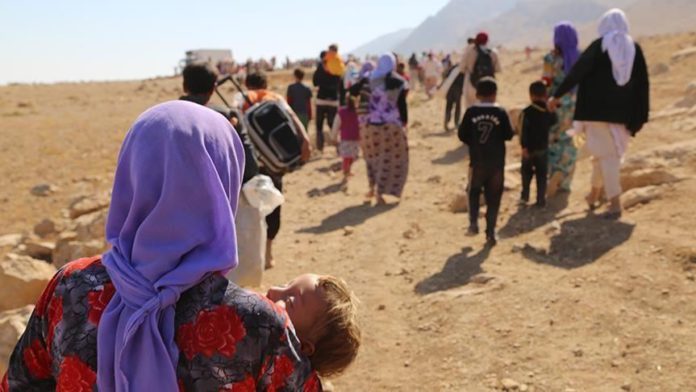 With their children abducted by the PKK terror group, families in Iraq’s Mosul called on the international community and the UN to rescue their loved ones or learn of their fate.

Ezidi parents recorded videos with photographs and the ID cards of their children to send to local media outlets in Iraq’s Kurdish Regional Government (KRG).

An anonymous mother in the video said PKK affiliates had been spotted near her house multiple times before abducting her underage daughter.

Longing for her daughter and hoping for her immediate release, she accused the PKK of preventing children from getting in touch with their families, in an appeal to humanitarian organizations and UN.

When families demand their children’s return, they are met by threats from the terror group, she added.

A senior Ezidi man in the video read the names of those abducted by the terror group and one father said all he knew was that his child had been held in a PKK prison.

In an interview with the Erbil-based Kurdistan 24 TV, Sirwan Rojbeyani, deputy governor of Mosul, said the PKK presence in Sinjar, northwestern Iraq, along with Hashdi al-Shaabi groups many of which are Iran-backed, posed a threat to the return of Ezidis to their homes and normal lives.

The deputy governor said the administration in Sinjar was illegal and unrecognized, urging the Iraqi central government to resolve the issue, though this to no avail as of yet.

On Sept. 3, Mir Ismet Tahsin Beg, deputy spiritual leader of Ezidis, said the PKK was not welcome in Sinjar, Mosul province, and should leave the region.

Mehma Halil, district governor of Sinjar, told Anadolu Agency in late August that the Ezidis held by the PKK terror group were kept in secret prisons.

The Ezidi community in the district has organized multiple protests against the PKK, demanding the return of children abducted by the terror group, and urged the Iraqi administration to intervene.

Terror group Daesh, also known as ISIS, attacked Sinjar district on Aug. 3, 2014, and either killed or detained thousands of people including children and women.

On the pretext of rescuing Sinjar from Daesh, the PKK has been occupying the region since 2014.