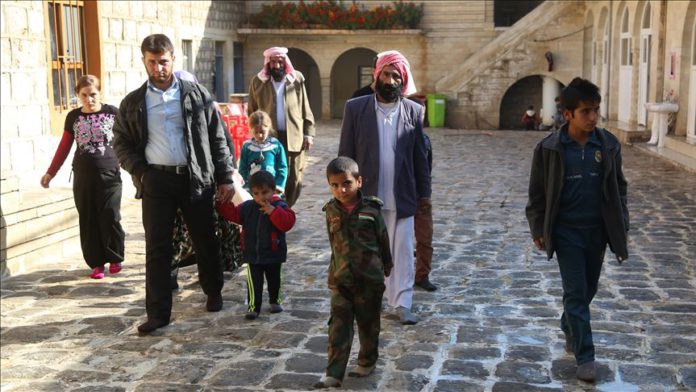 Yazidis in Iraq called on the central government in Baghdad to rescue their children who were kidnapped by the PKK terrorist organization, a local official said Wednesday.

Living in the northern Sinjar region, Yazidis have been under pressure from the PKK since 2014.

Yazidi families held demonstrations demanding their kidnapped children be returned home in an effort to make their voices heard by the central government and UN.

“The PKK has abducted tens of our young people. That’s why the PKK needs to be removed from the region,” Veyis Naif, head of Sinjar’s local council, told Anadolu Agency.

Naif urged the UN and Baghdad to step in as soon as possible. He also complained that the PKK had confiscated the locals’ fields and did not allow them to harvest their crops.

“If the PKK were not here, 80% of the Shengali [Sinjar] people would have returned to their homes by now,” he said, adding that locals wanted a common force, including Iraqi military and Peshmerga forces, to be deployed in the region to eliminate the terrorists.

According to local media, Yazidis held demonstrations in the Sinjar mountains, carrying photos of their abducted children.

Father Haydar Reso, whose son was taken by the PKK, said he would continue to protest until the government met their demand.

“My son was abducted about a year ago […] I want the Iraqi government to rescue my son from the PKK,” said a Yazidi mother.

A joint statement on behalf of the Yazidis in Sinjar was published after the demonstration, reiterating that the presence of PKK terrorists in the region would never be accepted.

“The PKK should leave Sinjar since Daesh [ISIS] members who committed great crimes against humanity against the Yazidis are taking sides with the PKK,” the statement said.

In mid-2014, Daesh/ISIS overran roughly one-third of Iraq, including Mosul which it took as its main stronghold.

It also captured Sinjar, where it is accused of committing war crimes, crimes against humanity and genocide against the local Yazidi population.

By late 2017, the Iraqi army — with the help of the US-led military coalition — recovered most if not all the territories lost to the terrorist group.