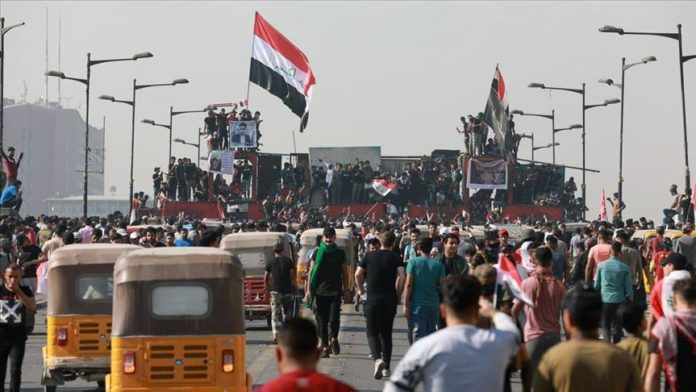 At least 44 people, including 11 security personnel were injured on Sunday in mass protests in Iraq’s capital Baghdad, a medical source said.

The source, preferring not to be named due to security concerns, told Anadolu Agency that 33 protesters were wounded in clashes with security forces in the downtown.

Most of the protesters were lightly wounded with batons by the security forces.

The latest protests marked the first anniversary of the start of the popular protest on Oct. 25, 2019.

Hatem al-Jabri, a police official, said that 11 security personnel were injured when an unidentified person threw a grenade at them at the Republic Bridge.

Al-Jabri went on to say that security forces are working to stop the rallies from entering the Green Zone, “however, some protesters were trying to penetrate the lines of security forces to reach there.”

He pointed out that security forces used batons and tear gas canisters to keep the demonstrators away from the area.

For his part, Muqtada al-Sadr, a Shia cleric and the leader of the Sadrist movement, said there were provocateurs who wanted a peaceful rally to deteriorate into riots.

“Therefore, the government must establish security […] and it must open roads and restore the prestige of the state,” al-Sadr added.

On Saturday, the Iraqi Defense Ministry ordered security personnel to prevent the carrying or use of weapons in the places of protests in the capital.

In August, the Iraqi government announced that a total of 565 Iraqis, including security personnel were killed since last October, during protests in various regions of the country.

The popular movement in Iraq succeeded in overthrowing the previous government headed by Adel Abdul-Mahdi and is putting pressure on the current Prime Minister Mustafa Al-Kadhimi to fulfill his pledges on improving services and fighting corruption.