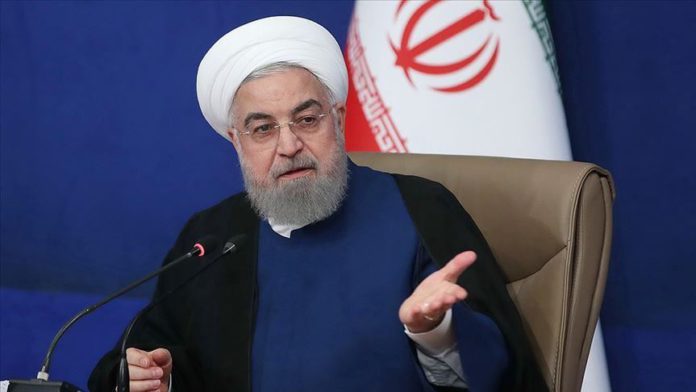 The already fragile working relationship between two of Iran’s top government officials is hurtling towards a breaking point, this time over the novel coronavirus that has engulfed the country.

President Hassan Rouhani canceled the meeting of the heads of executive, legislative and judicial branches of the government slated for Tuesday after Speaker Baqar Ghalibaf’s visit to a hospital.

Although his office did not explicitly specify the reason, sources in the government and local media reports suggest that the meeting was canceled amid fears of contracting the virus.

Ghalibaf, who was scheduled to host the Tuesday’s government meeting, created a stir after he visited a prominent hospital in Tehran on Sunday to meet coronavirus patients and medical staff.

Pictures of the Speaker flanked by patients and medics inside the COVID-19 ward at Imam Khomeini Hospital were widely circulated on social media, prompting a range of reactions.

Many posts compared Ghalibaf’s visit to the hospital with Rouhani’s in-house meetings, reigniting the long-standing political rivalry between the two seasoned politicians.

A political hardliner who lost twice to Rouhani in 2013 and 2017 presidential elections, Ghalibaf was recently elected as the speaker of Iran’s parliament heading the faction of conservatives.

While he has shown no inclination to run for the presidency again, Ghalibaf is seen as a formidable conservative figure who could be the kingmaker in next year’s presidential election.

He has been touring different provinces of Iran in recent months to consolidate the base of conservatives ahead of elections. The visit to a hospital on Sunday stirred the hornet’s nest.

Ghalibaf’s statement on Twitter suggested that he wanted to boost the morale of doctors and nurses at a time when Iran is grappling with the third wave of virus, which has put extra burden on hospitals.

Rouhani’s office, however, thought otherwise. His deputy head of communications Alireza Moezi took to Twitter to slam Ghalibaf for not complying with the mandatory health protocols.

“Control of the spread of virus depends on the observance of instructions issued by the specialized bodies,” Moezi said.

“All levels of the government must in the current situation follow it,” he added.

Without naming anyone, Moezi said violation of health protocols related to the pandemic conveys a “dangerous message” regarding public health.

“Attending to critical patients and taking a reporter and a camera with them is not standing with people but making people’s health concerns insignificant,” he said in a series of tweets.

While there has been no reaction from Ghalibaf yet, some conservative parliamentarians close to him were quick to jump in his defense.

“Ghalibaf visits a hospital in compliance with health protocols and the head of president’s office announces the cancellation of government meeting,” said Ahmed Amirabadi Farahani, a lawmaker from Tehran.

“Reason: the possibility of transmitting COVID-19 virus from Ghalibaf to Rouhani. It is really embarrassing,” he added.

On Monday, Iran recorded the highest single-day infections – 3,902 – and deaths – 235 – since the outbreak of virus in Iran in mid-February. The capital Tehran has been closed for one week.

At least 37 dead in bus, truck collision in Brazil