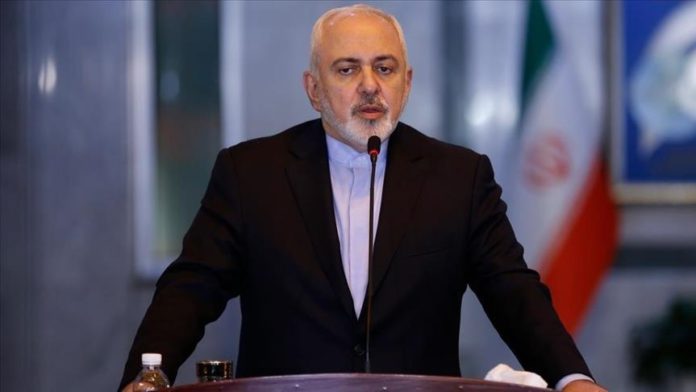 Responding to a question, Zarif told Tolo News “the Taliban has committed many terrorist acts,” and “we have not removed the Taliban [from our list of] terrorist groups.”

The Iranian foreign minister claimed Tehran neither supplies arms to the Taliban and nor treats its wounded militants.

The Taliban through a statement reacted sharply against these remarks.

“The Islamic Emirate [Taliban] is not on any UN terror list and comments by the Iranian Foreign Minister in this regard are based on faulty information. We urge Iranian officials to avoid aggravating Afghan sensitivities with such irresponsible statements,” said Taliban spokesman Zabihullah Mujahed.

Kabul-based writer and political commentator Syed Iqbal told Anadolu Agency that Zarif’s views were pretty much in line with the Afghan government’s stance in the troubled peace parley.

“This is without any doubt that like many regional countries. Iran too is engaged in the ongoing proxy war here, but as far as the Afghan government is concerned the only part that was controversial [in the interview] was Zarif’s comments on Fatemiyoun,” he told Anadolu Agency.

Graan Hewad, spokesman for the Foreign Ministry in Kabul, told Anadolu Agency the Afghan government has ‘contrasting views’. “The Constitution, national interests, and foreign policy of Afghanistan do not permit that Afghan citizens, expect from being under the national flag, to enter regional wars and conflicts in different countries.”

The watchdog noted in a report that Afghan children in Iran as young as 14 have fought in the Fatemiyoun division, an exclusively Afghan armed group supported by Iran that fights alongside government forces in the Syrian conflict.

The watchdog previously documented cases of Afghan refugees in Iran who “volunteered” to fight in Syria in the hopes of gaining legal status for their families.