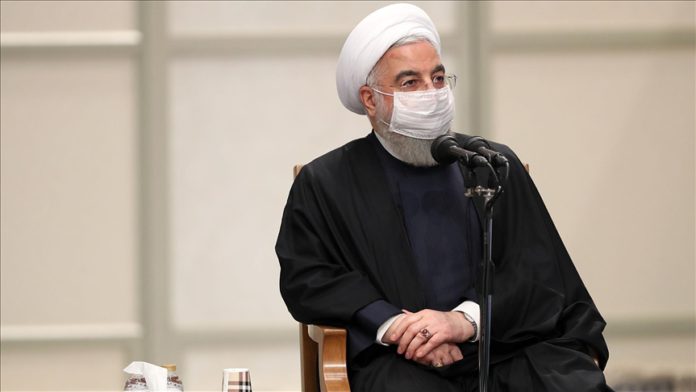 Iran’s president on Saturday joined other top officials in accusing Israel of killing the country’s top nuclear scientist, an incident fanning the flames of tension in the region.

Speaking a day after Mohsen Fakhrizadeh was killed by unidentified assailants on the outskirts of the capital Tehran, Hassan Rouhani said the killing will not affect Iran’s scientific progress.

“Once again, the evil hands of global arrogance were stained with the blood of the mercenary usurper Zionist regime,” he said, referring to Iran’s arch-enemy Israel.

He further said that the “horrific terrorist incident” sprang from the “inability” of the “enemies of Iran” to hold back its scientific progress and development.

Calls for revenge have been growing in Iran after many top military and political officials pointed their fingers directly at Israel and vowed “strong retaliation.”

It is the second high-profile assassination this year since January, when a US airstrike killed Gen. Qasem Soleimani. Officials in Iran see Israel-US coordination in the act.

Fakhrizadeh, who headed research and innovation at Iran’s Defense Ministry, was attacked in Damavand county near Tehran on Friday. The assailants reportedly blew up a vehicle ahead of him and then fired at his vehicle, wounding him and others with him.

The wounded were rushed to a nearby hospital, where Fakhrizadeh eventually succumbed to his injuries.

The incident has drawn anger and outrage across Iran. On Friday evening, a large number of people gathered outside Rouhani’s office in Tehran and demanded strong retaliation.

The protestors chanted slogans like “no compromise, no surrender, only fight,” putting added pressure on the outgoing government days after it extended an olive branch to the new US administration.

Many senior officials on Friday condemned the killing and spoke of “severe revenge.”

Baqeri, who had a long association with Fakhrizadeh, said “hard revenge” awaits his killers.

Foreign Minister Javad Zarif, among the first to condemn the nuclear scientist’s killing, said Israel was “likely to have been involved” in it.

Iran’s Defense Minister Amir Hatami said the killing of Fakhrizadeh shows “the depth of enemies’ hated towards the Islamic republic.”

He also said the country’s first COVID-19 test kits were produced in a research center headed by the slain scientist, hailing him as a pioneer in the fight against the pandemic in Iran.

Brig. Gen. Hossein Dehghan, Supreme Leader Ali Khamenei’s top military advisor and a strong contender for next year’s presidential election, said Israel is making “every effort to ignite an all-out war” with Iran, adding that they will “regret their act.”

Intelligence Minister Mahmoud Alavi, in a strongly worded statement, also said his country “will take revenge on the perpetrators” of the act.

Fakhrizadeh had long been on the radar of Israel’s spy agency Mossad, according to informed sources. He had survived a few assassination bids in the past.

In 2018, he was mentioned by Israeli Prime Minister Benjamin Netanyahu during a presentation on Iran’s nuclear program, singling him out as a pioneer of the program.

Fakhrizadeh is the latest in a series of attacks on prominent Iranian nuclear scientists in recent years, which Iran has always blamed on Israel.

A front-page headline in a conservative Iranian newspaper on Saturday said: “If we don’t strike [back], they will [continue to] strike us”.

The situation in the country is tense, and there seems to be disagreement on the issue of retaliation between Rouhani and top military officials.