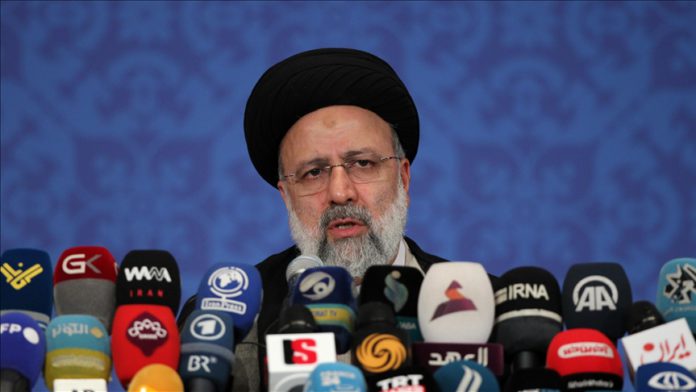 Iran’s President-elect Ebrahim Raeisi called on the United States on Monday to fulfil its commitments under the 2015 nuclear deal, ruling out new negotiations on the country’s nuclear program.

Addressing his first press conference after winning the June 18 presidential election, Raeisi said his message to the Joe Biden administration is to return to its obligations under the deal and lift sanctions imposed on Tehran.

Raeisi said Washington must be “held accountable” for violating its commitments under the nuclear deal, also known as JCPOA.

He said the US “maximum pressure” campaign against Tehran has failed, ruling out new negotiations with the West on Iran’s nuclear program.

On the question of whether he would be willing to meet Biden, Raeisi gave a terse one-word answer: No.

He said Iran’s negotiating team currently engaged in negotiations with world powers in Vienna to revive the nuclear deal will follow up on the talks. He added that removal of the sanctions and the US return to its commitments under the deal will be followed by verification by Iran.

The sixth round of talks between Iran and world powers in Vienna on reviving the 2015 nuclear deal were adjourned on Sunday, as delegates returned to their respective capitals for consultations and final decisions.

Raeisi further said that his government’s foreign policy will not be restricted to the nuclear deal, and that he will seek interaction with the world. He also spoke about his government’s desire to have “friendly relations” with neighboring countries.

Raeisi said relations with China have “great capacity” for expansion, calling Beijing an important ally for Iran. He also pledged Tehran’s continued support to “oppressed people of Palestine”, saying they must be given the right to decide their fate.

On Yemen, he said Iran is opposed to foreign intervention in the war-ravaged country and favors Yemenis running their own country.

In other remarks, Iran’s incoming president said his government’s internal policies would focus on “improving people’s livelihood” and work on “restoring people’s trust in the government”.

Raeisi also made the fight against corruption a priority for his government, which he said will begin from day one.

US envoy to UN urges Israel to refrain from demolitions, evictions...