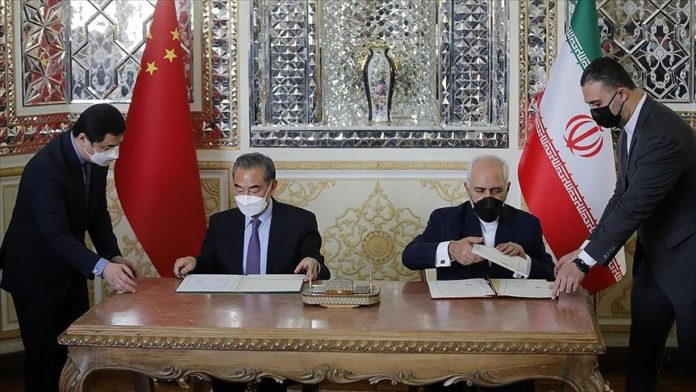 About 200 Iranians gathered outside parliament to demand annulment of the 25-year strategic cooperation deal, according to social media posts.

Demonstrators chanted slogans such as “Iran is not for sale,” “Death to those who sell the homeland,” and “We will fight, we will die and we will take Iran back.”

Protesters also held rallies in front of governorships in the Alborz and Isfahan provinces to voice “outrage” over the “controversial” pact. They carried banners reading “China, get out of Iran” and “We want the agreement canceled.”

Thousands of miles away, Iranians living in Sydney, Australia also protested the agreement in front of the Chinese Consulate.

Iran and China on Saturday signed a much-anticipated 25-year strategic cooperation agreement in Tehran as part of China’s Belt and Road Initiative.

The agreement aims to bolster economic cooperation between Tehran and Beijing and paves the way for Iran’s participation in the “Belt and Road” Initiative, a massive infrastructure project stretching from East Asia to Europe, with a focus on the private sector.

According to sources, cooperation in the defense sector is also part of the long-time agreement, which is significant given growing tensions with the West and recent joint military drills in the Persian Gulf region.

A joint statement issued after the signing of the agreement by Iranian Foreign Minister Mohammad Javad Zarif and Chinese State Councilor and Foreign Minister Wang Yi said the two sides aim to “promote development and a comprehensive strategic partnership” through the deal.