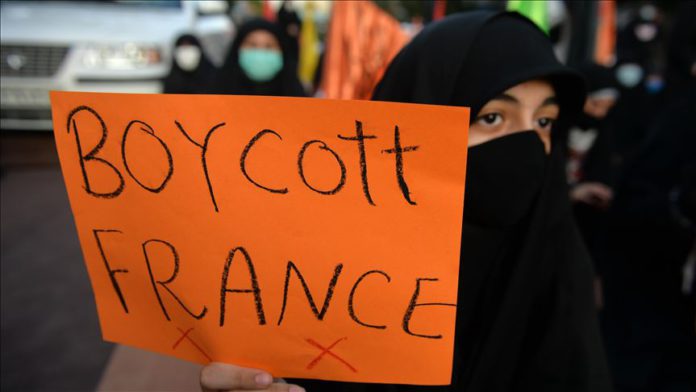 Large numbers of university students gathered in front of France’s embassy in the Iranian capital Wednesday to protest against recent blasphemous remarks by French officials against Islam.

They carried placards and banners with strong messages and chanted slogans against French President Emmanuel Macron.

The peaceful demonstration continued for a few hours, during which the protestors demanded an unconditional apology from Macron and other French officials.

They also called for the expulsion of the French ambassador in Tehran and a boycott of French products as a mark of protest against the complete disregard for the religious sentiments of Muslims.

“They keep doing it and we keep ignoring it. But now is the time to take a stand and teach them a good lesson,” Reza Alaavi, a student at Tehran University and one of the organizers, told Anadolu Agency.

He said all Muslims across the world are united on this, and it is a “good opportunity” to “fight the Islamophobia and hatred against Muslims.”

The protestors also changed the name of the street in front of the French embassy from Neauphle-le-Chateau Street to Mohammad Rasolallah Street.

The street had been named after a small village in northern France where Iran’s founder, Ayatollah Ruhollah Khomeini, spent a year in exile in 1978 after being deported from Iraq.

Alaavi said a formal application would soon be submitted at Tehran Municipality to change the street’s name to Mohammad Rasolallah Street.

Outrage has been growing in Iran over Macron’s Islamophobic remarks, with people demanding the expulsion of the French envoy and a boycott of French products.

On Tuesday, the French charge d’affaires in Tehran was summoned by the Foreign Ministry to lodge a formal protest against the “unacceptable actions” of French authorities.

Turkey fights for justice as region demands it: President